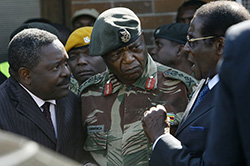 ZIMBABWE is headed for turbulent waters. Over the last few months, a protest movement has highlighted popular dissatisfaction with what many Zimbabweans see as the economic mismanagement and heavy-handed tactics of government of President Robert Mugabe.
Opposition groups are joining forces in an effort to defeat the ruling party in the 2018 elections. Even members of the national war veterans’ association, who traditionally have been reliable supporters of Mugabe’s Zanu PF party, have publicly denounced the president. Together with a deep economic crisis, these developments have set off fears of impending instability, political violence, and even civil war or state collapse. Any of those outcomes could produce a humanitarian catastrophe.
The good news is that the event that could trigger the worst violence – the loss of control over Zimbabwe’s armed forces by the country’s civilian government – is still unlikely. That is because the Zanu PF government and the top echelons of the Zimbabwe Defense Forces (ZDF) enjoy an unusually close relationship.
Their bond developed during their shared struggle as part of the Zimbabwe African National Union (ZANU), one of the groups that fought against the white Rhodesian settler state for more than a decade before taking power in 1980 as the newly independent Zimbabwe’s first ruling party.
Many of the Zimbabweans who commanded ZANU’s guerrillas during the civil war now hold top jobs in the country’s army and air force. In the past, as in the run-up to the controversial 2002 presidential election, when Zimbabwe’s army chief declared that his forces would only recognize a government headed by a veteran of the civil war, these commanders have closed ranks around the party when its grip on power was under threat.Advertisement

The military’s loyalty to Zanu PF is a product of deep ideological, personal, and institutional ties. The relationship lies at the heart of Zimbabwe’s political order, and it will discourage the mobilization of armed groups beyond the state’s control for years to come.
Stand by me
In recent decades, African insurgent movements have produced a number of national governments that have taken power only to see tensions between civilian and military leaders and even violent infighting—from Laurent Kabila’s regime in the Democratic Republic of the Congo to Michel Djotodia’s short-lived Séléka government in the Central African Republic. Zimbabwe has avoided that fate for three main reasons, all of which have their origins in the country’s long civil war.
The first source of the civil-military cohesion is ideological. During the liberation war, ZANU’s leaders indoctrinated the group’s membership with a shared set of values – an unusual blend of Marxism-Leninism and traditional spiritualism – in order to maintain discipline in the ranks and boost its appeal among the peasantry.
The group went further than most armed movements to instill its revolutionary ethos among its members by, for example, attaching political commissars to each of its guerrilla detachments. These ideological foundations became a source of solidarity and common identity among civilian and military officials after independence.
Second, during the war, ZANU exploited crises to unify its military and political leaderships. The pressures of conflict can make insurgent movements implode, often by encouraging political and military figures to turn against one another.
But in ZANU’s case, civilian leaders and frontline commanders work together for their movement’s survival. Their cooperation eventually became routine, creating trust—and a shared responsibility for policymaking—between civilian and military elites.
ZANU was pushed to the brink of defeat a number of times in its war against the Rhodesian state. The pressure reached its apex in 1975, when the organisation was reeling from the assassination of its party chairman and co-founder, Herbert Chitepo, the imprisonment of its military leaders in Zambia, and the widespread infiltration of the group by agents of the government of Rhodesian Prime Minister Ian Smith.
To stave off ZANU’s collapse, the Zimbabwe African National Liberation Army, the movement’s military wing, consolidated its authority and cut back on defections by doubling down on military discipline. ZANLA’s leaders also made a number of personnel changes, introducing new members with military experience into the ZANU War Council (the movement’s top strategic body) and using ZANU’s internal election system to remove or sideline politicians they did not trust.
Over the years that followed, ZANU leaders granted ZANLA commanders a say in important decisions—from how to negotiate with the Smith government to which members should be included in ZANU’s central committee. In the post-independence era, this history of cooperation meant that former ZANLA commanders were more likely to trust political elites to protect the military’s interests.
Finally, despite the influence they held over policymaking within ZANU, ZANLA’s commanders never managed to develop the sources of material wealth they would have needed to challenge their civilian counterparts. Perpetually harassed by a powerful counterinsurgency campaign, the guerrillas couldn’t secure large pieces of territory or impose taxes on them.
Instead, the movement’s military wing depended on ZANU’s central committee, which for much of the war was led by civilian politicians in exile, for weaponry and funding. The rank and file turned to the local population only for basic support—food, shelter, and the like.
When ZANLA’s commanders entered Zimbabwe’s military in the 1980s, then, most could not support themselves without the help of the civilian government. Over the decades that followed, that made Zanu PF’s patronage system all the more powerful. By granting retired military officers positions in companies backed by the state, for example, Harare could reinforce their loyalty to the regime with a material sweetener.
The factionalism factor
Zimbabwe’s civil war helped transform a guerrilla army into a national military unusual among its peers for its discipline, cohesion, and obedience to its civilian supervisors. As a result, unless a large faction of the military defects to the opposition, the Zanu PF government will be able to prevent a broad, violent challenge to its rule for the foreseeable future.
To be sure, protesters have already clashed with the police and Zanu PF partisans. But even if the violence continues, it likely will not lead to a real civil war so long as the ZDF is under the firm control of loyal officers.
A number of forces have the potential to break this equilibrium. The first is the prolonging of the government’s current cash crisis. The ideological and institutional bonds between Zimbabwe’s civilian and military elites will buy the government time, but Harare cannot avoid paying the security forces forever; in both June and July, it paid military salaries late. Unless the government secures more funding from external creditors soon, it could face unprecedented dissent in the military ranks.
The next force is the passage of time. Over the next decade, most of the aging ZANLA veterans who serve in top posts in the ZDF will retire. As these former guerrillas step down from their positions, a new group of officers will take the helm of the nation’s security forces—and unlike their predecessors, they might be willing to accept civilian leaders who played no part in Zimbabwe’s civil war.