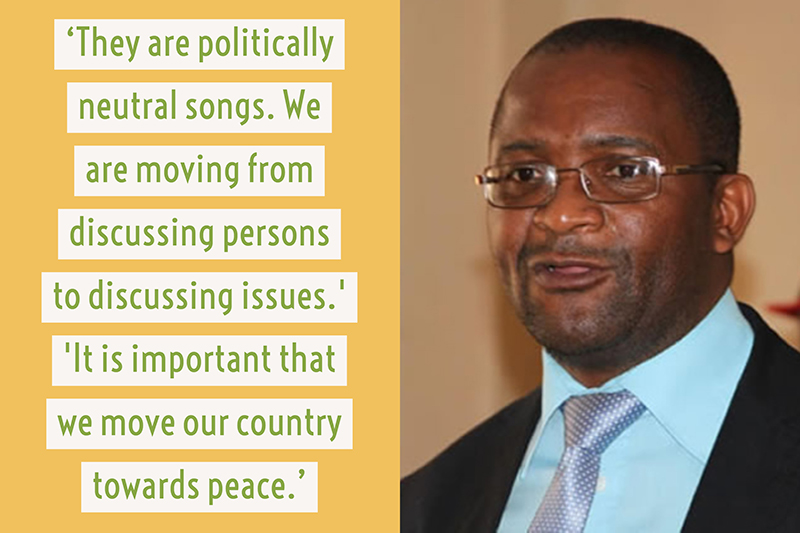 ZANU PF legislator for Mazowe South, Fortune Chasi and MDC-T secretary general Douglas Mwonzora are set to release a song aimed at encouraging peace in a country torn apart by years of political conflict mainly between their two parties.

“We are doing a song on peace and peaceful elections,” Mwonzora told NewZimbabwe.com weekend.

Mwonzora said the two lawyers and politicians could consider doing an album if their song is well received by locals.

“We hope that these songs would be played on radio and in rallies to promote peace,” said the former Nyanga North MP.

“They are politically neutral songs. We are moving from discussing persons to discussing issues. We are doing one song initially but as time goes on, we may consider doing an album.”

Chasi is not new to the music business as he has already done a 12-track anti-violence album titled No To Violence while Mwonzora has no known musical background.

But the MDC-T top official was quick to say he has had a dance with the arts before.

“I have done songs before. I composed one that was a hit within the MDC-T the first one was Tsikamutanda and the other one is called Ngavaende which I composed in 2014.

“I do have a background in singing. After all, in my boyhood I was a choir boy at school.”

The Chimurenga duet between the two is expected to be out by next week.

The song could be the first arts collaborative effort by politicians from the rival parties outside both parliament and the constitution making process.

Their initiative comes as the country prepares for fresh elections expected this July.