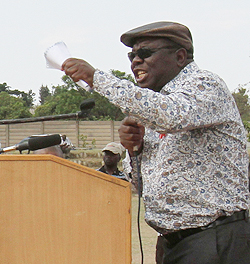 This is the first in a two part article by Durban University of Technology lecturer, Rodwell Makombe, on the just ended elections and the way forward for Zimbabwe.
I HAVE been following the election debate in Zimbabwe, particularly the opinion pieces that have been published and the utterances that have been made by some prominent figures in response to President Robert Mugabe’s landslide “victory”. What seems evident to me is that most people, including those who have been die-hard advocates of change and supporters of the MDC-T, have strategically aligned themselves with the winners and dumped the losers.
MDC Welshman Ncube’s Paul Themba Nyathi has publicly accepted defeat in Gwanda while NCA’s Lovemore Madhuku has also urged out-going Prime Minister and MDC-T leader Morgan Tsvangirai to accept defeat. The timing for this political turn is very suspicious or should I say pragmatic. We know that Lovemore Madhuku and Munyaradzi Gwisai are long-time opponents of Mugabe’s rule. But following the latter’s victory; they have suddenly turned their backs on Tsvangirai and started lavishing praises on Mugabe.
I really wonder if Mugabe needs such praises given that he already has many praise singers – professional and otherwise – within his ranks. I have also learnt that Raymond Majongwe, the leader of the Progressive Teachers’ Union has gone an extra mile to send congratulatory messages to Mugabe. In his own words, Majongwe describes Mugabe’s win as “a sign of confidence in your leadership by the people of Zimbabwe who have given you the sole mandate to form the next government until the next national plebiscite in 2018”. This, indeed, is a man who has learnt something in the struggle for change. Or, has he?
This sudden change of heart is obviously not accidental. They say a hyena does not whine in the night for nothing. Is it that the trio have suddenly realised that Mugabe is not the demon that they thought he was? Is it that they were wrong all these years, and they have come to their senses? Or is it despondency? What could have inspired this 180 degrees turn? If these people have been backing the wrong horse for all these years, what it says to me is that their credibility as leaders is questionable.
How could they lead teachers (Majongwe), law-makers (Madhuku) and egalitarianists (Gwisai) the wrong way for all these years? What exactly is behind this sudden change of heart which ironically coincides with Mugabe’s landslide victory? I suspect the three have simply realised that unseating Mugabe is a dream that will never come true, hence the self-contempt which is designed to buy a route back to Zanu PF.Advertisement