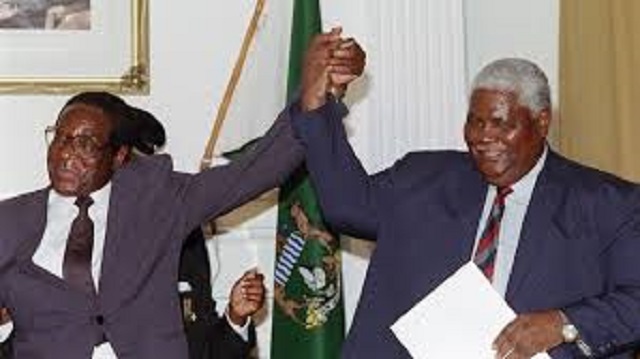 Opposition party Zapu says the Unity Day, commemorated annually on December 22, has lost significance because of continued repression of Zimbabweans by the government.

In its Unity Day commemoration message, the party said it find it hard to embrace the Unity Day when the government’s actions clearly promote disunity in the country.

“Equally ironic is that as we observe this day (Unity Day), Zimbabweans across the political and race divide are continuing to be preyed on by the state which should protect them. Human rights are observed only for those who identify with Zanu PF,”

“Property rights are only observed for those who support Zanu PF. In fact, not only does associating with Zanu PF become a means to an end for some but an end to a means for others. It is almost a death sentence to oppose them,” Zapu spokesperson, Msongelwa Ndlovu said in a statement.

Ndlovu cited the recent cases of Chief Murinye and Siphosami Malunga as some of the examples where the state is bullying its citizens.

“Not even traditional chiefs are safe in Zimbabwe anymore. Chief Murinye of Masvingo is now sleeping with one eye open because he simply called out corruption by those in government,”

“Even the children of revered nationalist like Sydney Malunga have no rights to own property. His son Siphosami Malunga is running a thriving agricultural project but his land is lined up for acquisition by Mr Obert Mpofu and his acolytes despite court orders stopping him doing so. It is most despicable considering that Mr Mpofu is known to harbor personal grudges against the fallen hero,” said Ndlovu.

The party also condemned the displacement of a white commercial farmer from his property in Chinhoyi.

“We equally condemn the illegal occupation of the farm of Mr Garry Hobbs by one Colonel Gwanzura in Karoi. We find it hard that the government is actively promoting unity and would want the world to associate the 22nd of December with unity when they are doing the opposite. Those who thrive on our divisions cannot be expected to promote unity otherwise mosquitoes could be expected to cure Malaria,” he added.

Unity Day is celebrated on December 22, a day which the late Joshua Nkomo led PF Zapu signed a unity accord agreement with the late former State president Robert Mugabe to form what then became Zanu PF.

The unity accord is credited for ending fierce hostilities in the western regions of the country in which an estimated 20 000 mostly Ndebele civilians were butchered by the military at the behest of the government.