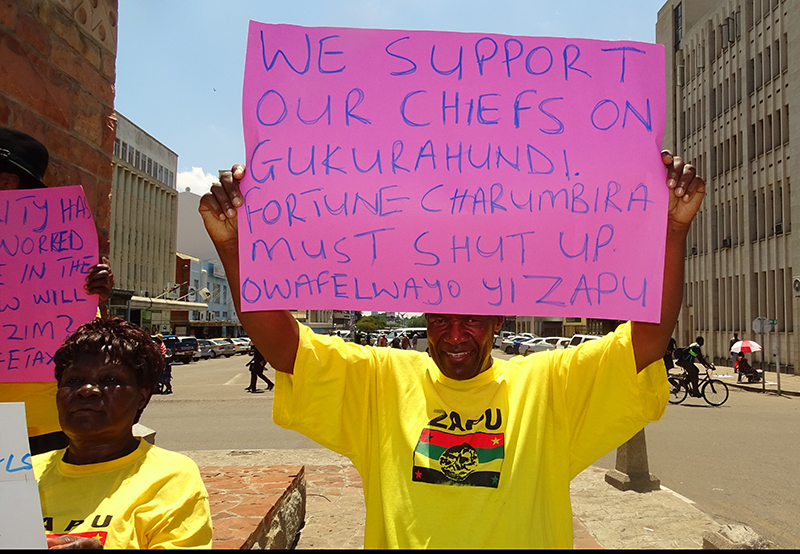 THE ZAPU women’s union last week staged a protest in Bulawayo against the worsening economic situation characterised by rampant price hikes at a time when incomes are stagnant and getting wasted by inflation.

“Austerity has never worked anywhere in the world. How will it work in Zimbabwe? Price hike madness must stop,” read one of the placards in apparent reference to the recent budget announced by finance minister Mthuli Ncube which was dubbed ‘austerity for prosperity’.

Zapu women chairperson, Ritha Malanga said the union organised the protests after realising that the “government does not care about the plight of its citizens”.

“Women have been greatly affected by the current economic hardships which have seen everything including the prices of food, transport and medication going up,” she said in an interview with NewZimbabwe.com.

“At government hospitals, we cannot access medication because it is not there while private pharmacies are charging in foreign currency. Where do they expect us to get the forex when there are no jobs?”

Malanga also objected strongly to the government’s model of devolution.

“Devolution is not decentralisation. Government must come to Zapu for devolution lessons,” she said.

“We want provinces to completely control their resources not the paltry 5% which they are saying will be retained by provinces.

“How long can a click of Zanu PF leaders continue to enjoy our wealth while the rest of the people are wallowing in poverty? Enough is enough!”

The Zapu women’s leader also complained about the prices of sanitary wear which have skyrocketed despite government suspending duty on the products.

“Our dignity as women has been eroded,” she said.

“Imagine some women and girls are now using unhygienic materials which sometimes exposes them to cancer because they cannot afford the prices of sanitary wear.

“We thought by removing (Robert) Mugabe our problems are over, but it seems the lives of women is getting worse by each day,” added Malanga.