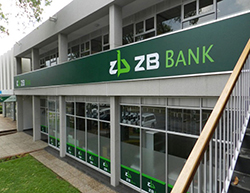 HARARE: ZB Financial Holdings has returned to the black and on Wednesday  announced a net profit of $8,9 million for the full-year to December 2015. This compares with a net loss of $9,8 million in 2014.
The group’s chief executive Roy Mutandagayi told analysts at a briefing that cost rationalisation measures implemented over the last 24 months have assisted in sustaining a profitable trend during 2015.
“Net revenue reduced by 1 percent to $56,7 million in 2015 compared to $57,3 million in 2014. This was largely as a result of a higher fair value loss on investment properties and stocks which amounted to $2,7 million in 2015 compared to $0,8 million in 2014, an increase of 251 percent,” he said.
Notwithstanding the 13 percent reduction in net interest income, aggregate earnings from lending and trading activities increased from $11,9 million to $13,6 million, Mutandagayi added.
“This positive outturn was achieved as a result of a $10,9 million recovery from previously written off debts. Gross loan impairment charges during the year increased by 80 percent from $7,7 million in 2014 to $13,8 million in 2015,” he said.
“The depressed net interest income is a result of a reduced credit portfolio and a general weakening of rates as credit absorption capacity on the market continued to deteriorate.”
Despite the firming up of business in both the life assurance and the short-term reinsurance businesses, ZB’s net insurance premium income reduced marginally by one percent.
The financial institution attributed the reduction in insurance premium income to an increase in the aggregate claims and related expenses which went up eight percent from $20,9 million to $22,5 million.
Mutandagayi said in spite of this increase, the risks underwritten by the group remained profitable during the year.
In the period under review, ZB’s recurring operating expenses reduced by 19 percent from $57 million in 2014 to $46,3 million in 2015.
Total assets for the group increased by 12 percent from $379,8 million in 2014 to close the year  at $424,1 million.
ZB declared a dividend of 0,54 cents per share for the full-year.Advertisement