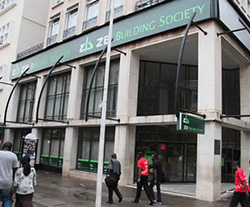 ZB Financial Holdings says it has reduced operating costs by 15 percent in the four months to April after aggressive cost-cutting measures designed to respond to the poor economic performance.
“As of 30 April, 2015 the group’s costs were running at 15 percent less than the level incurred during the same period in the prior year.
“Resultantly, the cost to income ratio has improved to 82 percent from levels above 100 percent during 2014,” chief executive Ronald Mutandagayi said in a trading update after the group’s annual general meeting on Friday.
The group, which has banking and insurance subsidiaries, also realised an improved profit compared to the prior year, but he did not give figures.
“Despite a slow-down in balance sheet growth on the back of a mild retreat in deposit balances and loans to customers, the group managed to garner a cautious profit outturn for the first four months of the year, achieving an annualized return on equity of 12 percent,” he said.
“The operating result for the first four months is above target set for the period. The group expects an even better out-turn in the second half of the year in line with its long term performance trends.”
In January this year, Mutandagayi said the group expects a 10 percent income growth in the first half of the year, while it will continue its search for new investors to inject fresh capital and boost underwriting capacity. Last year, the group raised $10 million through an agro bond.
The group’s net interest income for the six months to June 2014 declined to $26,8 million from $34,5 million, while non-interest income also registered a 26 percent drop to $15 million despite a 14 percent growth in ATM card usage.Advertisement