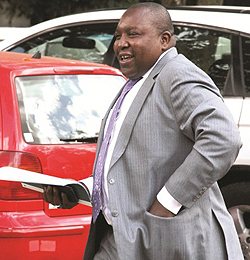 THE interesting nuclear war sparked by the entertainment editor of the Sunday Mail has spilled over on the social networks, where people are debating how Garikai Mazara had the ‘audacity’ to take on the powers that be at Pockets Hill for their alleged shoddy service.
The rather tasteless response from ZBC has also received keen attention and interest. It well could have been the most amusing response ever to be printed in a newspaper this year, were it not for the equally tasteless fact that it was in fact at the expense of the taxpayer that such ranting would be made in the form of a presumably paid for advert.
After ten years in public media, I have the full knowledge that there has always seemed to be an unwritten and unlegislated pact between public media houses to conveniently overlook the faults of the other. Yet in the pursuit of protecting ‘our own’ the effect has been that standards have been let to slide tragically into untold lows, that have seen standards rot fester and rot.
Mazara, to his credit, made a number of interesting observations which showed how the public broadcaster had done well, and continues to do well in some of their services they give to the public. That has never been doubted or refuted.
Indeed, there was reasonable ignorance from Mazara on the workings of broadcast media at the national broadcaster where he had ZBC shoulder the blame for signal problems which otherwise should be the responsibility of Transmedia. The jester’s article from ZBC ably, and rightly made that point clear, suggesting that signals are the responsibility of Transmedia.
Mazara’s assertion that ZBC was to blame for poor signals and often loss of sound or picture is something that the layman would ordinarily also lay on the doorstep of ZBC. For a journalist that Mazara is however, that oversight is nothing short of a lazy approach to reporting or opinion writing as he was supposed to at least research on that matter and a lot many others before putting pen to paper.Advertisement