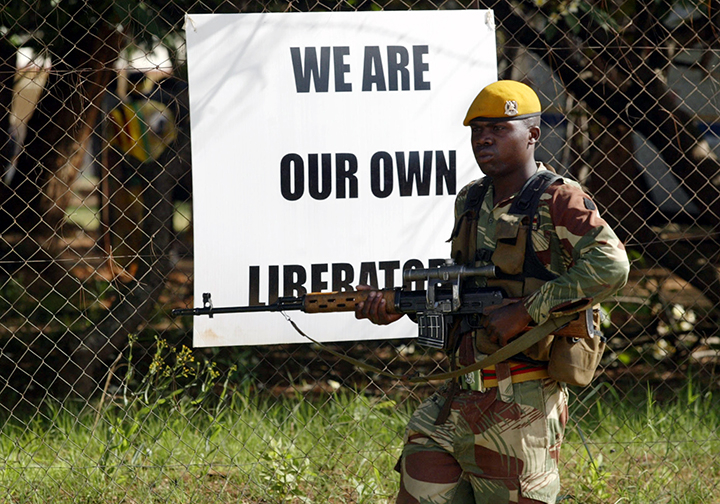 Chigumba was appearing before the Parliamentary Committee of Justice chaired by Zanu PF lawmaker Fortune Chasi at which he was grilled by political parties and civil society groups regarding the opposition of ZEC staff.

MDC-T secretary general Douglas Mwonzora set the back rolling in a presentation demanding the reform of the ZEC secretariat.

“We need the independence of ZEC from the government. We call for the de-militarization of the Commission,” Mwonzora said.

He said some members of the ZEC secretariat were serving members of the army when the country’s military generals announced they would “never salute anyone without liberation war credentials” ahead of the 2002 presidential elections.

“That order has not been reversed, soldiers work on orders and as long as nobody has rescinded it, the order stands,” said Mwonzora.

“ZEC must consult with Commander Defence Forces General Philip Valerio Sibanda to resolve that issue and get him to reverse that order.

“That would go a long way in allaying the fears of citizens let alone political parties that are due to take part in the elections.”

In response, a jittery Chigumba said ZEC last recruited from the military over half a decade ago but seemed to suggest the government freeze on employment had been the reason.

“On military personnel, people we have from security sector joined ZEC five or six years ago. And of late we have not employed anyone since a treasury freeze,” said Chigumba.

While history is replete with former members of the election management body moving back to serve the army after a “tour of duty”, Chigumba claimed her staffers had resigned from the military.

“In their files, they’re no longer in the security sector. They are employees of ZEC.”

The ZEC boss said she is on a mission to rebuild the Commission’s credibility.

“ZEC is an independent body. We at the moment make recommendations to the executive through Ministry of Justice.

“We do not want to compromise our mandate,” said Justice Chigumba

MDC-T Chief Whip Innocent Gonese weighed in arguing that ZEC needed to do more to clear the air on the “purported involvement of some military personnel or retired army members in the management of elections”.

Pushed to reveal numbers Chigumba said of the 300 members of staff at ZEC, at least 15% are “ex-military”.