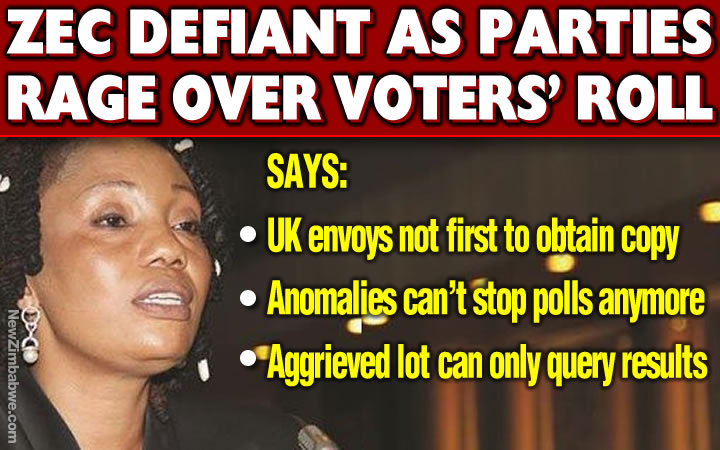 DAGGERS are now drawn between the Zimbabwe Electoral Commission and the MDC Alliance led by Nelson Chamisa after ZEC boss Priscilla Chigumba declared Monday that nothing including anomalies in the voters roll will stop the forthcoming elections slated for July 30.

This comes as the opposition continues to wonder why ZEC delayed to issue the register up until after the nomination court which they said was against the law. Also, opposition leaders, especially MDC Alliance’s David Coltart, wondered why Zanu PF was not bothered about the voters roll while other parties were.

Late Monday, MDC Alliance leaders and analysts were insisting that ZEC was in breach of the law adding that the British embassy was issued with a copy of the voters roll while opposition parties and activists hustled to obtain one.

That was after British envoys had announced that they had been issued with the roll while prominent lawyer, Fadzai Mahere reportedly hustled to obtain a copy.

ZEC Commisioner Qhubani Moyo posted on his Facebook page late Monday that it was false that the British Embassy were the first to be issued with a copy, adding they were “probably the first to post”.

Ahead of that, Chigumba had told a press briefing at the ZEC offices in Harare that any aggrieved political parties and candidates could only challenge the results of the elections as it was not possible for them to stop the plebiscite, the first since the ouster of former President Robert Mugabe by the military last November.

Chamisa’s Alliance has, on several occasions, maintained that there would be no elections if ZEC failed to meet its demands for reforms.

The coalition of seven political parties argued that most of the reforms they were insisting on were clearly administrative and did not require parliament to sit.

ZEC, however, dismissed the demands, which Chihumba said were misdirected, adding that her commission could not legally deal with the issues raised by the opposition.

Chamisa, on the other hand, warned that they would shut down Harare if ZEC failed to implement their demands.

But Chigumba on Monday declared that after the proclamation of the election date by President Emmerson Mnangagwa, only an earthquake would stop the elections.

“After the proclamation of the dates by President Mnangagwa, nothing stops an election. Anomalies in the voters roll cannot stop an election. Candidates can only challenge the results,” Chigumba said.

Thousands of MDC Alliance supporters thronged the streets of Harare where they marched to the ZEC offices and handed over a petition to Chigumba with 10 demands for electoral reforms before the election slated for July 30.

ZEC has, over the years, been accused of rigging the elections in favour of Zanu PF, and in 2008, the electoral body took more than a month to announce the presidential election results, which the late former MDC-T President Morgan Tsvangirai won.

ZEC later ruled that Tsvangirai had not garnered enough votes to form a government and ordered a re-run. Tsvangirai withdrew from the run-off citing violence against his supporters, leaving Mugabe to run alone.