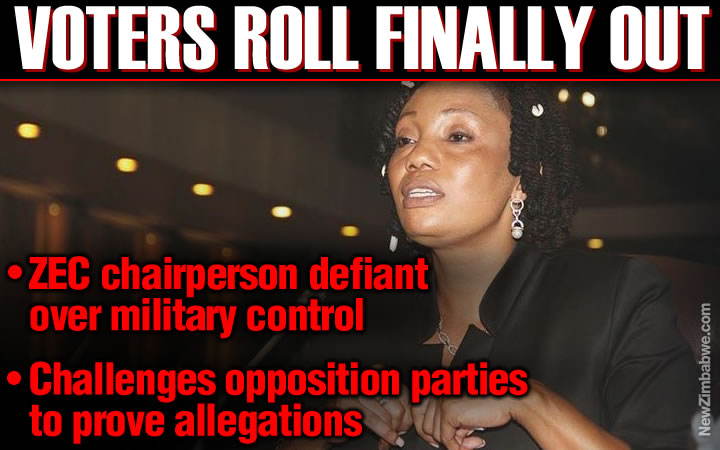 THE Zimbabwe Electoral Commission (ZEC) confirmed Friday that the consolidated voters roll is now ready and accessible to candidates and the general public.

Addressing a media conference this Friday, ZEC chairperson Justice Priscilla Chigumba described the release as “historic” and admitted that the roll is a key factor in democratic elections.

“The Zimbabwe Electoral Commission would like to announce that the consolidated voters’ roll for the 2018 harmonised elections is now available,” said Chigumba.

“This is indeed a historic moment for the commission and the generality of all Zimbabweans who have remained patient up to this day.

The development comes after a ruling by High Court judge Tawanda Chitapi this
Thursday ordering the elections body to release the roll within five working days in a challenge brought before the court by the Election Resource Centre.

The ZEC chief also challenged critics to prove allegations that the electoral agency is run by serving security service personnel.

“I am challenging anybody who has evidence that we have serving personnel in the military within our ranks to bring forward that evidence. Until such a time that evidence is availed to me, I will aver that we are not doing anything wrong,” she said.

Justice Chigumba insisted that any ‘security’ personnel on the agency’s books were retired from service, revealing that ZEC approximately had 13,8 percent of retired military personnel within its ranks.

“They answered to advertisement, went through interviews and were successfully assigned to certain duties in Zec.
“There is no law in Zimbabwe that prevents us from employing anyone who we are sure is no longer serving.”

Meanwhile, ZEC released the roll – which has 5, 681, 604 voters – a day after the sitting of the nomination courts.

According to Justice Chigumba, the voters’ roll will be availed candidates in electronic format free of charge, but the public will have to fork out $2, $10 and $20 for ward, constituency and national voters’ rolls respectively.

She said ZEC hoped that the voters’ register it compiled using the new system, the Biometric Voters’ roll, would satisfy the expectations of stakeholders.

“The commission is aware that the voters’ roll is a critical component of the electoral process and in some instances, a source of electoral disputes,” she said.

“Be that as it may, the commission hopes that the voters’ roll that is being availed today (Friday) will meet public expectations and stakeholders who have devoted their precious time and resources in complementing ZEC’s efforts towards this achievement.”

Chigumba also appealed to political parties to desist from violence and implored on media to be objective and balanced—factors she described as important for elections to be free and fair.