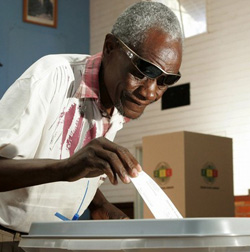 LAST week, I wrote an article, “ZEC in a Fix over Bye-elections” (see https://newzimbabweconstitution.wordpress.com/2015/01/22/zec-in-a-fix-over-by-elections/ ), in which I argued that ZEC had placed itself in an awkward position after initially and, for a long time, disowning its powers over voter registration and the compilation of the voters roll.
Now, with bye-elections having been called in two constituencies, ZEC had to either, maintain that adamant stance and declare their inability to run the bye-elections without the voters’ roll or make an incredible and ultimately embarrassing about-turn and declare that it has those powers, after all.
With bye-elections due on 27th March 2015 and the Nomination Courts due to sit on the 29th January 2015, ZEC was in a bind and had to make a decision.
On Tuesday, The Herald newspaper reported that ZEC is proceeding with the registration of voters. Although there is an attempt to gloss over its past denials, it is plain that ZEC has performed an embarrassing somersault, ditching its previous position. I should add that I very purposefully submitted that article to The Herald but they decided in their wisdom, not to publish it.
For the record, I always thought ZEC had the power to carry out voter registration and to compile and maintain the voters roll. Likewise, I always thought ZEC had an obligation to provide the voters roll where interested parties made a demand for it in terms of the Electoral Law. What surprised me all along was ZEC’s declaration of its own impotence in this respect.
The problem was that ZEC was strident in its denial of this power. ZEC, through its Chairperson have always maintained that they do not have this power because of the absence of enabling legislation. I thought this was wrong and my reasons for this are in the public sphere (https://newzimbabweconstitution.wordpress.com/2015/01/22/zec-in-a-fix-over-by-elections/ ).
I argued that ZEC did have the constitutional power and could easily exercise it if they had the will to do so, even in the absence of provisions in the Electoral Law. The absence of legislation was not a bar to the exercise of their constitutional power. But ZEC were adamant that they did not have this power.Advertisement