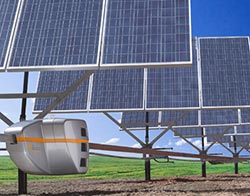 THE Zimbabwe Power Company (ZPC) has applied to set up three solar power plants in the country, in a move aimed at improving electricity supply.
The power plants, each with 100MW capacity, will be located in Gwanda, Matobo and Munyati.
“Notice is hereby given that the Zimbabwe Energy Regulatory Authority (ZERA) has received an application from the Zimbabwe Power Company (ZPC) (Pvt) Limited to construct, own, operate and maintain the proposed 100 MW Insukamini Solar Photovoltaic Power Plant at Valindre Farm of Matobo district in Matabeleland South Province,” the Zimbabwe Energy Regulatory Authority (ZERA) said in a statement on Monday.
Recently, ZPC sought permission from the State Procurement Board to cancel a $113 million contract for repowering of Munyati Power Station awarded in 2015 to an Indian firm Jaguar Overseas Limited, citing delays in securing funding for the project.
ZPC is currently undertaking a multi-million extension of Kariba Power Station by a further 300 megawatts from the current capacity of 750MW. Chinese firm Sino Hydro is undertaking the expansion work, with China also providing the bulk of the $533 million funding.
Zimbabwe’s electricity demand stands at 1,400MW while actual generation is around 980MW with the balance augmented by imports from South Africa and Mozambique.
The southern African nation also plans to upgrade its oldest coal fired power plant — Hwange  — in a $1,3 billion project which is expected to increase generation capacity by 600MW. The project has stalled as talks for a $1,1 billion loan from China Exim Bank have dragged on since 2014 and missed several restarts.Advertisement