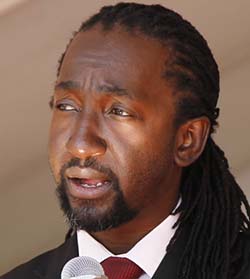 THIS second instalment of the ZBR comes in a week that has seen two notably interesting events that talk to the theme of the #2018Resistance. The first one was the statement issued by the MDC-T Youth Assembly wherein they said “Mnangagwa will never fool us” as they called for the restoration of legitimacy. The second one was the highly anticipated HardTalk interview of Professor Jonathan Moyo, and in particular the coup conspirators and terrorist junta’s efforts to postpone elections for three years.
For the #2018Resistance, the one common theme, albeit manifested differently, is the issue of understanding the message regardless of the messenger. The ZBR was particularly moved by the MDC-T Youth Assembly’s raising of the issue of Kudzai Chipanga who was arrested for calling on the robbers and pirates within the coup conspirators and military junta to account for the missing US$15 billion that they looted and plundered from the diamond fields of Marange. These young people displayed commendable principle by rising above partisanship to defend a fellow young patriot’s right to call even those with the machinery of murder to account.
Furthermore, the MDC-T Youth Assembly has correctly set itself the noble, progressive and revolutionary objective of restoring legitimacy. This recognition that the regime in power and control of government in Zimbabwe is illegitimate puts to shame several senior people who have been shamefully reticent about boldly declaring that the coup perpetrated in Zimbabwe is illegal. Hava svodi zvachose; they ought to be ashamed of themselves. The ZBR commends and congratulates the MDC-T Youth Assembly for performing better than such well-staffed and resourced institutions like SADC, the AU and the UN.
This approach by the MDC-T Youth Assembly has also contrasted quite significantly with some of the initial approaches that were taken by ostensibly more senior compatriots who chose to focus on Professor Jonathan Moyo as a person as opposed to interrogating the issues he articulated during the HardTalk interview. The season of kuitiswa (being played like a puppet) will continue with us as Zimbabweans for as long as we do not allow ourselves the opportunity to hear what the other person is saying despite having preconceived notions and prejudices about them.
The initial kneejerk reactions of dismissing Professor Moyo had to be revisited when Charamba confirmed that the issue of postponing elections was a major discussion point when the terrible twins of the coup conspirators and terrorist junta, Mnangagwa and Chiwenga, visited the MDC-T leader, Morgan Tsvangirai. Charamba lied and sought to claim that Tsvangirai wanted the elections postponed.Advertisement