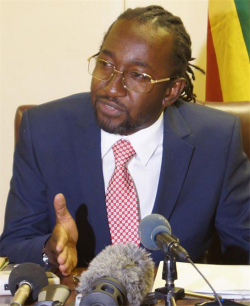 THERE is appalling madness going on in Zimbabwe at the moment; the country has literally lost its socio-political and economic compass. Zimbabweans and the international community watch with astonishment as policy discord is normalised in our once great nation. The disparity of the views being expressed by senior government officials is shocking.
As if that is not enough, President Robert Mugabe who is the country’s Chief Executive does not bother trying to clarify his government’s policies, assuming he still has the capacity to do so. Instead, the President seems to be enjoying the policy catfights and the bruises as ministers outdo each other in the retrogressive game of policy inconsistency.
The president’s lack of policy leadership – a trademark of his misrule, has left his lieutenants fighting each other, making fools of themselves in the process. Lunatic views are being peddled to gullible audiences as ‘policy’ by what can only be described as opportunist ministers trying to make themselves relevant as they claim to understand the President’s views better than everybody else. The discord has virtually made it impossible for any serious investor to make long term plans in the country – one reason why investors want to get their return as quickly as possible and get out as we saw in at Chiadzwa.
In government, the monumental madness keeps rearing its ugly head. Quite often, we hear of things uttered by government ministers that just do not make sense. According to Indigenisation and Economic Empowerment Minister, Patrick Zhuwao, Zimbabwe ‘does not need Foreign Direct Investment (FDI)’ and suggesting otherwise is either ‘ungodly’ or ‘unpatriotic’.
The minister goes on to suggest that those who advocate for FDI are denouncing Mugabe and “interfering” with the nephew Minister’s portfolio; they are also agents of regime change. While the minister has his right to express himself including peddling senseless views or simply exposing his sheer ignorance, his warped view on FDI must not go unchallenged.
In this day and age, a government minister of a country that is supposed to be a member of the international community of nations brings us shame if he stands up in front of the world to say such nonsense. One hopes he is not ignorant to the extent of not realising that each time his uncle gallivants all over the world looking for multimillion-dollar deals with the Chinese, that is FDI he will be desperately hunting for.Advertisement

That he has always returned home empty-handed is more about the iniquity of his policies than irrelevance of FDI. More likely than not, this is just a desperate attempt on Zhuwao’s part to make himself relevant. Even patriotic diehards agree that Zimbabwe desperately needs investment and is ill-prepared to cherry pick.
Contemporary economies have made it necessary that every country, including China and the USA, needs both domestic and foreign investment to grow. Economic growth that is tittering at the bottom after shrinking by more than 40%, unemployment that is estimated at around 90% and tight liquidity in the country suggest that Zimbabwe should be the last country to utter such nonsense. The country desperately needs investment, now.
Economies need investment to create future productive capacity and replace old equipment and machinery. Such investment is a key determinant of future economic growth and investment is either domestic or foreign. The ‘foreign’ and ‘domestic’ is a description of where the investment comes from. Even inflows from the Zimbabwe diaspora, if channelled to investment, fall under FDI.
If Zhuwao agrees that his uncle’s government desperately needs to improve people’s livelihoods, he must accept that Zimbabwe’s economy needs to grow to increase the size of the economic cake. His views against FDI, suggest that the nephew minister believes that Zimbabwe’s domestic investment is large enough to spur the much needed economic growth.
The problem is that Zimbabwe’s domestic investment is woeful, or more aptly, awful. If anything, most of the local players are nothing but “subsistence and speculative investors” including the youthful and uninformed minister whose ascendancy to the ministry was more as a result of family relationship than merit. There are several Zimbabweans in and out of Zimbabwe who could do a much better job, if only they were Mugabe’s nephews or nieces!
There are a number of variables that can be used to measure domestic investment and one of them is called ‘gross domestic savings’ which is usually measured as a percentage of Gross Domestic Product (GDP). Calculated as a percentage of income, gross savings is the amount of money that an economy sets aside after total consumption (consumption today versus consumption tomorrow), in other words the amount of money that we set aside to ensure that we have a better future.
There is general agreement that what we save today has an impact on future economic growth. Some countries have great traditions of saving while others are not so great. One country with a great record of gross domestic savings is China which saves approximately 50 cents out of every dollar they make. Much closer to home, not long ago, Botswana had more than 30 billion Pula stashed in foreign reserves.
The benefits of those many years of saving are now there for anyone to see. On the other hand, Zimbabwe’s gross savings record is very poor. Chart 1 below shows Zimbabwe’s gross domestic savings as a percentage of GDP for 40 years since 1975 (source: world bank). We have included figures that cover previous ‘sanction periods’ for readers to judge for themselves the sanctions mantra.

Not preparing for a future: Zimbabwe’s gross domestic savings and percentage of GDP