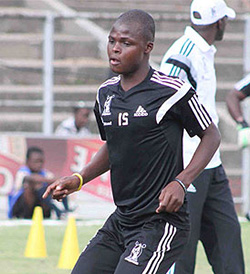 HIGHLANDERS have been dealt a blow for Sunday’s league trip to travel to Shabanie Mine following an injury to forward Ozias Zibande.
The young striker who grabbed a brace in their last match against Chiredzi FC was injured at training on Thursday.
He is nursing his ankle and has been dropped for the Shabanie Mine trip.
Caretaker coach Mark Mathe said he will miss Zibande but his side will just fight without the forward.
“The young boy was doing well of late so obviously we will miss him. Everyone could see that his game has improved a lot.
“But injuries are part of the game and we just have to make do with what we have and try to get a positive result,” Mathe said.
However, the Bulawayo giants will not cry much as Simba Sithole has returned from injury and could be used as direct replacement for Zibande.
But making their visit of Shabanie Mine complex is that they would be facing a team that is eager to avoid relegation.
Shabanie are third from bottom.
“This game is going to be a very big challenge for us. Shabanie Mine are in a bad position so they will try by all means to avoid relegation and they are eying to beat us,” Mathe said.
Highlanders are playing to end the season in the top four.
RESULTS AND FIXTURES
Saturday: ZPC Kariba 2-1 Dynamos (National Sports Stadium) SS, Chicken Inn 2-0 Buffaloes (Hartsfield)
Sunday: Caps United v Harare City (National Sports Stadium) SS, Shabanie Mine v Highlanders (Maglas ), Bantu Rovers v How Mine (Hartsfield),Hwange v FC Platinum(Colliery), Chiredzi v Triangle United (Chishamiso), Chapungu v Black Rhinos (Ascot)