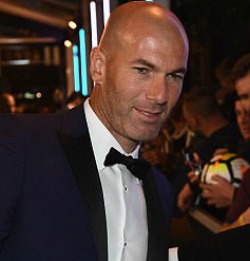 Real Madrid boss Zinedine Zidane was named as the top men’s coach in world football at FIFA’s The Best ceremony in London’s Palladium Theatre on Monday night.
The Frenchman, who came runner-up to Claudio Ranieri in this category last year, beat fellow finalists Antonio Conte of Chelsea and Massimiliano Allegri.
But none of the aforementioned Italians had a genuine chance of winning this prize ahead of Zidane, who helped Real become the first team to successfully defend the Champions League in June.
Zidane has also led Real to La Liga, FIFA Club World Cup, Supercopa de Espana and UEFA Super Cup glory over the past 12 months.
He was presented with the award by former Leicester boss Ranieri.
Collecting the award, Zidane began his victory speech apologetically by saying: ‘My English is very bad.’
He then went onto pay credit to Conte and Allegri.
Zidane also name-checked Cristiano Ronaldo, Luka Modric, Toni Kroos and Marcelo, who were later named alongside Sergio Ramos in a Real-dominated FIFPro World 11.
The award for the top women’s coach went to Sarina Wiegman, who led Holland to their first ever major title at Euro 2017.

Wiegman was unable to attend the awards ceremony as she was preparing her side for a vital World Cup qualifier against Norway on Tuesday.
She had been presented with her gong earlier when Dutch legend Marco van Basten visited her during a training session.
‘Thank you for this award,’ she said during a pre-recorded video which was played at the ceremony.
‘It is a great recognition that I got this. But without the team and without the great staff we had during the tournament we would not have achieved what we achieved.
‘Also, thanks to my parents – my mum, my dad – and my family – my husband and my two kids. They are always so supportive.’Advertisement