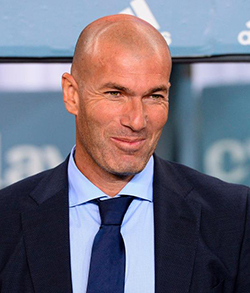 SPAIN: Real Madrid boss Zinedine Zidane highlighted the threat posed by Tottenham Hotspur’s Harry Kane as the English side travel to the European champions on Tuesday battling for top spot in Champions League Group H.
Kane has scored as many goals (43) this year for club and country as Cristiano Ronaldo but in fewer games, sparking rumours Real could try to poach another rising star from Spurs after taking Luka Modric and Gareth Bale to the Bernabeu in recent years.
“I don’t know what will be of Kane’s future, but I can talk about the here and now,” Zidane said on Monday.
“He’s a fundamental player for Spurs. He’s very good at everything, but what he does is score goals.
“He’s not a static player, he always finds space and is quick. He’s a complete player.”
Both sides are well placed to reach the last 16 having beaten Borussia Dortmund and Apoel Nicosia in their opening two group games.
And Zidane expects the two meetings on Tuesday and in two weeks’ time at Wembley between the sides to decide who progresses as group winners.
“We have two games versus Spurs. The first final of the group is tomorrow.
“We want to play well and I think anyone who enjoys football will see a good game.”
Bale is Madrid’s most notable absentee as a calf injury means he will miss a reunion with his former club, while Dani Carvajal and Mateo Kovacic are also still absent.
However, goalkeeper Keylor Navas returned to training on Monday and Zidane looks set to recall Casemiro, Modric and Isco, who were rested for Saturday’s 2-1 win at Getafe.Advertisement