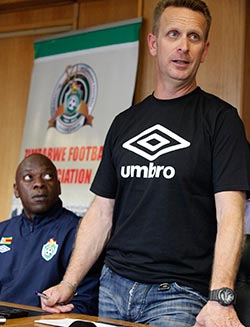 THE Zimbabwe Football Association (ZIFA) has made a kit deal for the Warriors with global British sportswear group, Umbro, it was confirmed Tuesday.
The company, a subsidiary of American company Iconix Brand Group, will kit the Warriors for the African Nations Championship (CHAN) which will be held in South Africa between 11 January and 1 February 2014.
Zimbabwe are in Group B which includes Burkina Faso, Morocco and Uganda.
The kit deal was confirmed a day after coach, Ian Gorowa, and his charges that went into camp for the tournament which is reserved for home-based players only.
Speaking at the launch of the deal in Harare, Umbro sales director Donovan Bell said he hoped the arrangement would culminate in a longer term partnership going beyond the CHAN tournament.
“Three months ago we were approached to come in as a technical partner and we said we would start with the CHAN team and then go to the women and the junior teams,” he said.
“Umbro’s slogan for 2014 is ‘Heart and Soul of Football’ and we believe this tallies with the spirit that we have seen in the Warriors. In the few games that I have watched them play, I have seen that kind of spirit.
“We are going to dress the Warriors squad for CHAN as agreed to between Zifa and Umbro we will provide everything from footwear, T-shirts, training equipment, playing kits, tracksuits and off field attire.
“We will provide everything they require and since we are based in Cape Town where they are playing we can also get them anything they may further require.”
Zifa boss Cuthbert Dube, urged Umbro to market the kit among Warriors supporters in South Africa.
“Today Umbro have seen it fit to dress the Warriors ahead of and during the 2014 CHAN tournament and the association would like to place on record our deepest appreciation and gratitude to Umbro for the interest they have shown in the Warriors brand,” he said.