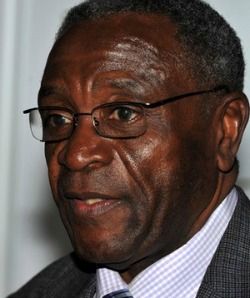 ZIFA has set March 29th next year as the date for board elections in which incumbent president Cuthbert Dube is seeking re-election.
An 11-member Electoral Committee has already been set to run the plebiscite.
Former Zifa vice president Tendai Madzorere has been included in the committee that also includes Zifa chief executive officer Jonathan Mashingaidze as secretary.
Zifa Lawyer and legal advisor Ralph Maganga also sits in the committee.
“The new Zifa Electoral Committee, established in terms of the Zifa electoral code’s article 3.1, is an independent body charged with overseeing the electoral processes in respect of the nominations, vetting of candidates, production of final list of candidates, production of electoral material, namely nomination forms, ballot papers and the holding of the elections,” Dube said.
“A composite report shall be submitted to the Zifa board by the electoral committee at the end of March 2014. Should any individual have reasonable grounds for contestation of the decision of the Electoral Committee, he/she should within 96 hours, file their appeal accompanied by an appeal fee.
“The appeal shall be heard by a Special Appeals Committee made up of three persons. Once the appeals committee disposes of the appeal, within four days, the verdict shall be pronounced and it shall be final.”
With Dube throwing his hat into the ring, no other person has publicly declared their interest for the top post.Advertisement