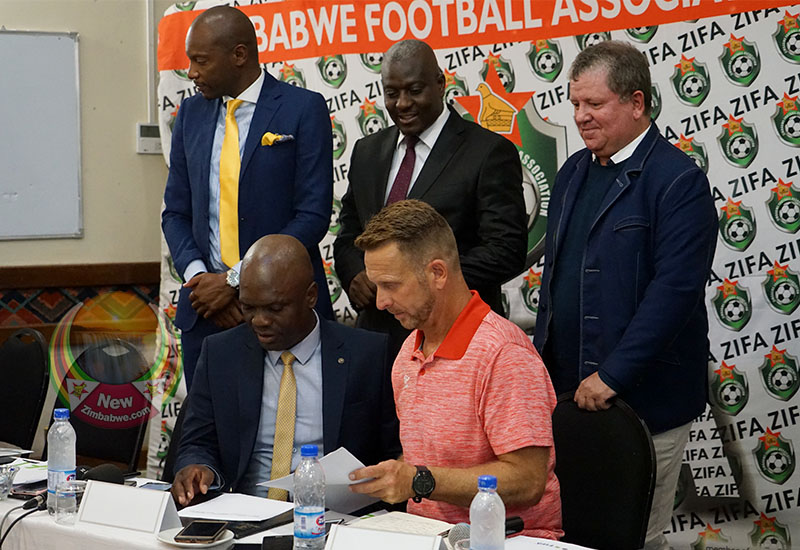 ZIFA and Umbro officials during Monday’s press conference in Harare

ZIFA president Felton Kamambo said Monday that they had opted for Umbro after numerous meetings with other potential sponsors in South Africa.

The deal marks Umbro’s return to Zimbabwe after a similar arrangement ended in 2013.

“In terms of value I think you will get those details later on but in terms of items that we are going to get, Umbro is going to give us kits for all our national teams, women included and they are also going to provide some replicas for all the teams,” Kamabo told a press conference in Harare.

“We are optimistic that our partnership with Umbro will enhance our visibility as a football brand.”

“We went to South Africa last week, we engaged quite a number of kit sponsors, we settled for Umbro because they were giving us the best deal as far as other sponsors were concerned,” added Kamambo who together with Umbro representative Errol Dicks could not disclose the monetary value of the new marriage in terms of figures.

The national association and Umbro both assured football fans that the deal marks the end of a drought for the Warriors’ replica jersey.

“We are in the process now of finalising the colours and getting the replicas sorted out,” said Dicks who also revealed that the planned to open retail outlets in the country.

“It is our objective that we have the roll out for our first home match which is going to set a presence in Africa where ZIFA will qualify for CAF and we are excited that the team will participating in that match will wear the brand Umbro.

ZIFA and Umbro have set a target of selling one million replica jerseys by the end of their initial contract.

Zimbabwe has had a tumultuous relationship with sponsors in the past despite promises from recently ousted president Philip Chiyangwa of sustainable backing for the Warriors during his three-year reign at the top of Zimbabwean football.

Legea (2004), Joma (2015) and Mafro (2018) have all previously kitted the Warriors but continuously failed to provide replica jerseys to supporters.

In a side interview with NewZimbabwe.com Kamambo said their relationship with Umbro ends an era of unfair deals between the football association and some of its sponsors .

The Warriors will wear the new kit on March 24 when they face off with Congo Brazzaville at the National Sports Stadium in a 2019 AFCON qualifier.

The online platform allows fans to purchase tickets from across the world using various methods of payments.

Kamambo said that they had already realised the sale of some 900 tickets for the match already and will not be selling tickets on match-day to avoid chaos at the giant stadium as has become the norm when the Warriors play.