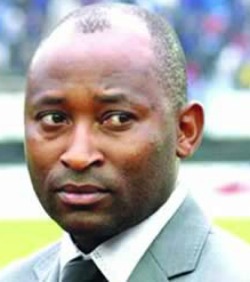 ZIFA have leapt to the defence of Warriors team manager Wellington Mupandare following a barrage of attacks directed at him by Mamelodi Sundowns officials in the wake of his fall out with former Zimbabwe captain Peter Ndlovu over the release of Khama Billiat.
Zimbabwe faces Liberia in the 2019 African Cup of Nations qualifier at the National Sports Stadium on Sunday.
Mupandare accused Ndlovu of blocking Billiat’s travel to Harare for a medical assessment by the Warriors medical team.
Mamelodi Sundowns, however, insisted the player was injured and their spokesperson launched attacks on Mupandare for suggesting the former Warriors skipper was blocking Billiat from joining camp describing him as “excited by the new job”.
Ndlovu also later flew to Harare on Wednesday, together with Billiat to “clear the air” as well as present the player to the Warriors medical team for a second opinion.
Ndlovu, who is the first Zimbabwe senior soccer team captain to lead them to their maiden African Cup of Nations finals in Tunisia in 2004, before taking them to Egypt two years later, said it was unfair for people to question his loyalty to the national team cause.
Billiat was deemed unfit to play on Sunday and immediately returned to South Africa together with his manager, Ndlovu. And Zifa on Thursday issued a statement backing Mupandare.
“ZIFA has noted with concern, distasteful sentiments expressed by Mamelodi Sundowns Football Club officials towards our senior national manager, Wellington Mpandare.
Mpandare conducted his duties in a professional manner in the process of requesting for the release of Khama Billiat to report for assessment by the national team’s medical team; therefore, we feel that denigrating comments made were unwarranted,” read part of the statement from ZIFA.
“As ZIFA we are fully confident of our team manager’s ability to execute his duties in a manner that ensures that relations between ZIFA and Mamelodi Sundowns remain cordial.
As an association, we believe our team manager acted within the dictates of Fifa regulations in seeking the release of Khama Billiat for national duty and assessment by our medical team to determine the extent of his ankle injury.
ZIFA has great respect for the Mamelodi Sundowns president, Patrice Motsepe, his executive and club management, but we believe the vitriolic attacks on Mpandare were unnecessary, and they only engender disunity and unwanted hatred within the football family.Advertisement

ZIFA also takes this opportunity to remind Mamelodi Sundowns that all official correspondence between them and the association is generated from the office, hence, they should not regard allegations from the media fraternity as ZIFA’s official position in any matter.
Any displeasure from the Sundowns camp over the conduct of ZIFA officials is accepted but it should be delivered through the proper channels.
It is our ultimate goal to promote the spirit of unity and friendship that FIFA seeks to inculcate in the relationship between clubs and football associations, as well as with all stakeholders.
Our relationship with Mamelodi Sundowns is mutually beneficial for both parties and it has been there for a long time, it is our keen desire to see it continue to flourish, for the benefit of both Zimbabwean and South African football.”