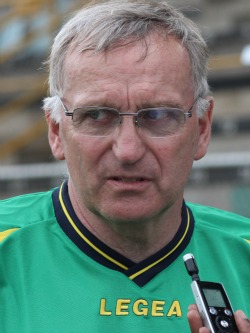 THE Zimbabwe Football Association (Zifa) has insisted that interim Warriors coach Klaus Dieter Pagels would be named head boss before the expiry of his current deal.
Zifa chief executive Jonathan Mashingaidze said on Tuesday the framework for the extension of the German coach’s contract was already in place.
He said the association had held three discussions with the coach over the issue adding what remained was just the finalisation of Pagels’ salary.
“It’s work in progress,” said Mashingaidze.
“We are still working on extending the coach’s contract. We have so far held discussions on the issue on three occasions and I (say) that the frame work is there. What is only left is to agree on the coach’s salary.”
Zifa board member competitions Benedict Moyo also confirmed that the soccer controlling body was unanimous in giving the coach a contract extension.
“The Zifa president Cuthbert Dube and chief executive Jonathan Mashingaidze are working on the issue of the coach’s contract,”said Moyo who was the head of delegation for the Warriors’ trip to Guinea.
“It should be ready before his current deal expires.”
Pagels did not return to Zimbabwe with the team after their 1-0 defeat to the hosts in their 2014 world cup qualifier on Sunday.
The German coach proceeded to his home country after the match and is only expected back in Harare on July 6 ahead of the Warriors’ preparations for the Cosafa Castle Cup tournament in Zambia next month.
But the national association has previously stated that he would be going back to Germany if his contract was not renewed.
Pagels was working as ZIFA technical advisor when he arrived in the country until he was unveiled as the national team head coach late last year, succeeding Rahman Gumbo.
Gumbo resigned after Zimbabwe’s failure to reach the 2013 African Nations Cup Finals held in South
Africa.
The German was tasked to build a team that can compete at the 2015 African Cup of Nations and has placed emphasis on building a younger team while inculcating his philosophy of a short passing game with the hope of qualifying for major competitions in future.
While results have not been pleasing after presiding over three competitive matches which all ended in defeats, the Warriors coach believes his project is on the right track.Advertisement

Zimbabwe fell 1-2 to Egypt in Alexandria in March and lost 2-4 at home two weeks ago before being defeated 1-0 by Guinea where they fielded an under strength team after key players including chief striker Knowledge Musona withdrew because of injury.
Failure by Zifa to raise funds for the trip to the west African country on time did not help matters either as the team was forced to leave on the match day.
Zimbabwe still have a single point from their campaign after last June’s goalless draw away to neighbours, Mozambique, who they will face in their last game in September.
Egypt, who are looking to return to the World Cup for the first time since 1990 after failing to qualify for the last four editions, are already through to the final qualifying round after defeating Mozambique 1-0 on Sunday to maintain top place with 12 points in the campaign.
The Pharaohs’ final group match will be at home against Guinea in September. Guinea are in second place with 10 points while Mozambique are third with two points.