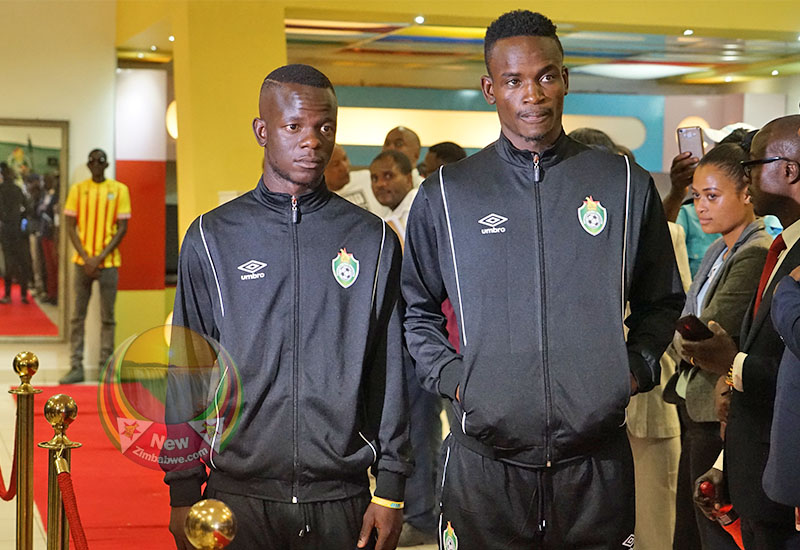 THE Zimbabwe Football Association (ZIFA) on Thursday finally unveiled the much talked about Warriors’ Umbro kit amid mixed reactions amongst the national team’s fans.

The top sportswear maker had to revert to Zimbabwe’s traditional gold, green and white colours after fans had expressed their disapproval over earlier stripes shared online by Umbro and ZIFA.

The kit, which are going for RTGS$175 each, is already instore with clothing shops, Topics and Truworths being the main retailers.

A cheaper t-shirt range for fans who cannot afford the RTGS$175 replica is already being processed according to Umbro South Africa representative Brian Katzen who graced the colourful event in Harare.

“We actually have a fan t-shirt range that is launching within a couple of days. We have three different t-shirt designs so you will see that in stores in the days to come,” said Katzen.

Six stripes were presented by Umbro with three limited editions also in store for fans.

The top British sportwear manufacturer will also provide soccer boots, socks and tracksuits for the Mighty Warriors and all U23 national teams for the next three years.

The limited editions are the ones which had been received with mixed reactions by fans on social media as Umbro appeared to abandon the Warriors traditional colours which are gold, green and white.

Warriors cheerleader Chris ‘Romario’ Musekiwa described the development as the right move heading to the finals being hosted by Egypt from 21 June to 19 July.

“The kit is great. We love it and we are already raring to go to Egypt for the finals with the boys.

“These are some of the preparations we were hoping would come on time for the finals and they have…they have retained our traditional colours and presented more choices for the fans which is very much welcome,” said Musekiwa.

Those who criticised the kit questioned its quality while more were confused by what Umbro said were limited Warrior’s jerseys thinking they were the ones to be used at the finals.

“This is a joke on Zimbabwean football fans. What have we done to deserve this?” questioned popular football analyst and commentator Mike Madoda on Twitter in reference to the limited edition.

Speaking on behalf of ZIFA president Felton Kamambo, Premier Soccer League (PSL) chairperson Farai Jere said that he was glad they had managed to prove that the deal was not a dummy sold by Umbro.

“I am proud and relieved that the official launch of our kit is finally happening, I am glad that all parties involved worked hard so that our team gets quality apparel which befits their performance.

“A lot of sectors thought we were sold a dummy by Umbro but we stuck by them. Today we are here witnessing an historic event a few days before the Warriors leave for the Africa Cup of Nations,” he said.

ZIFA got into partnership with Umbro in February with hopes of having the kit and replicas in time for the Warriors’ penultimate AFCON qualifier against Congo but efforts hit a snag with the association playing hide and seek with members of the media who sought answers on the deal.

They then wore an alternative kit.

Unfulfilled promises by board member Chamu Chiwanza that the kits will arrive in time for the clash had begun to raise eyebrows on the kit deal whose monetary value is yet to be announced.

Zimbabwe was drawn in Group A alongside seven time African champions Egypt whom they face in the tournament opener, Uganda and the DRC.