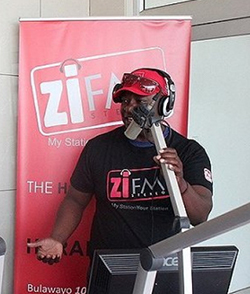 COMMERCIAL radio station, ZiFM Stereo says low bandwidth in Zimbabwe is affecting plans to grow its online audience through live streaming.
ZiFM’s head of sales and marketing, Dirk Viljoen told a workshop on broadcasting organised by the Media Institute for Southern Africa (MISA) last Friday that the low speed of internet has rendered live streaming difficult.
Internet bandwidth is still at an average speed of 140 bytes per second and below, which is relatively low as compared to the recommended two megabytes per second, he said.
“ZiFM since its inception has been live streaming but we have had our challenges with it. The biggest challenge is the (low) speed of internet. It’s a big challenge in Zimbabwe,” said Viljoen.
Viljoen said ZiFM has three licenses for broadcasting, satellite and streaming which allow it to broadcast via the internet.
ZiFM’s online listenership averages 250 per hour, most of them overseas.
Viljoen said the majority of radio listeners in Zimbabwe use their mobile devices. Mobile broadband accounts for 99 percent of the current internet usage.
“What it means is that most people going on internet in Zimbabwe are using mobile phones,” said Malvern Mkudu, a mobile media consultant at the same workshop.
However, Viljoen said although internet penetration has increased, the uptake on live-streaming is still low.Advertisement