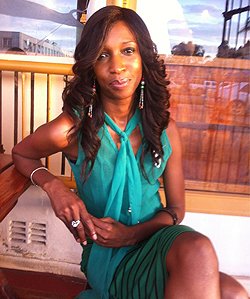 ZiFM Stereo has suspended DJ Tinopona ‘Tin-Tin’ Katsande after a sex tape of her romping with her ex-boyfriend went viral on the internet.
The Breakfast Show presenter has been taken off air “to allow our internal disciplinary processes to take place,” ZiFM Station Manager Peggy Mvududu told New Zimbabwe.com on Tuesday.
Katsande has told of her torment after the three-minute mobile phone recording of her and an ex-boyfriend having sex was leaked.
The former Studio 263 actress used her Twitter account to give her fans an advance warning of the release of the sex tape after she was contacted by a downmarket Harare tabloid.
She said on September 8: “Brace yourselves! Last year my phone was stolen and it had mine and the ex-boyfriend’s private, explicit content. They took it to Zim tabloid today #apologies vanyarikani.”
In further posts, she told fans she felt “violated”. She had begged the tabloid not to publish details of the sex tape without success, she added.
“I feel so very violated and to think the person waited one year to do this. Maaan! Life also sometimes.”
In November last year, Katsande shopped her boyfriend, Brian Munjodzi, to the police after he battered her. Using her timeline, the video was taken at around the same time she was dating Munjodzi.
Katsande said she was planning to sue the tabloid concerned for breach of privacy.
“I wronged no-one in my book. It was a private moment between me and my man not for public consumption. Now I’ve got to hit the courts,” she said.
The sex tape itsself is unremarkable. After viewing it, one Twitter user said: “The guy appears totally handicapped. He has no idea what to do with her.”
Katsande’s is the second sex tape of a high profile person to be leaked in the last year, after another mobile phone recording of the Big Brother star Pokello Nare and her ex, the singer Desmond ‘Stunner’ Chideme, went viral.Advertisement