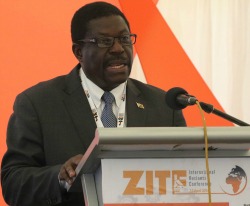 THE 2016 edition of the Zimbabwe International Trade Fair (ZITF) has recorded less exhibitors, with participants from Zimbabwe’s largest investor, China, dwindling.
The 2015 edition of the annual event had about 412 direct exhibitors but this year the figures dropped down to 390, with 19 countries, including Zimbabwe, exhibiting.
The 57th edition is running under the theme, “Innovate, Integrate and Industrialise”. Togolese President Faure Essozimna Gnassingbé officially opened the event Friday.
The fair, which opened on Tuesday, ends on Saturday.
Some of the countries exhibiting this year are South Africa, Botswana, Kenya, Cyprus, Germany, Indonesia, Iran, Mozambique, Zambia, Russia, Poland, Namibia and Japan.
South Africa is the largest exhibitor with 32 companies, surpassing China which used to take a huge chunk of the space at the fairgrounds.
63 percent local exhibitors are from Harare, while 28 percent are from Bulawayo and the rest from other parts of the country.
The manufacturing sector will make up 25 percent of the exhibitors, service providers 40 percent and 30 percent are from the distribution sector.
ZITF Board Chairman, Bekithemba Nkomo, told journalists that despite the drop in exhibitors, they were happy with the quality of exhibitions at this year’s edition.
“We are happy with the quality of the exhibition and the quality of the products. We have noted an improvement in the quality of exhibition,” Nkomo told journalists.
China, which is Zimbabwe`s biggest source of foreign direct investment (FDI), used to occupy the whole of Hall 2 but this year only a few companies are in attendance.
Hall 2 is not being used at this year`s edition.
Despite the drop in figures, locals continue to flock to the trade showcase.
Thembekile Bhebhe, of Nkulumane 12, told NewZimbabwe.com that despite the economic downturn the country is experiencing, she had to make sacrifices for her family to attend.
“This is one of the few events in Bulawayo that we can attend as a family. Things are not okay in our country, economically, but such events are always good to attend, you get caught up in the euphoria and forget about some of the problems you left at home, at least for those few hours,” she said.Advertisement

Despite the trade fair coming a week from the opening of the school`s second term, thousands of people turned out on the first public day.
Blessing Ngwerume, an airtime vendor, said the trade fair is always lucrative for their business.
“I enjoy coming to the trade fair because we have so many visitors coming to the city and most of them usually spend substantial amounts of money on airtime. The trade fair is good for our business,” he said.
Some of the popular stands at this year`s fair are the Science, Technology, Engineering and Mathematics (STEM), Zimbabwe Defence Forces and livestock exhibitions.