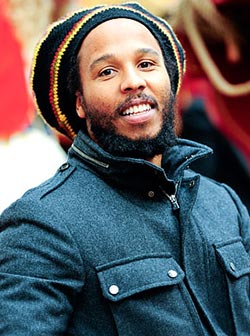 IT is 35 years since the Grammy-winning musician Ziggy Marley started following in the footsteps of his famous father Bob. The eclectic style on his new album “Fly Rasta” shows that at 45, Marley is now keen to forge his own path.
“I wanted to create what I call ‘epic reggae’, with a little futuristic tinge to it,” Marley said, speaking to Reuters ahead of a headline show in London. “I wanted to do it with a standard of quality that is not compromised in any way.”
He only breaks reggae tradition on the album’s lead single, “I Don’t Want to Live on Mars”, where his distinctive vocal is placed over a rock-influenced pop production.
Other parts of the release are classic, upbeat reggae, making it clear that representing his father comes naturally to Marley’s first born. “I am his son and we share a certain way of life; the foundation of Rasta. We share a philosophy of what this music is,” he said.
However, he admits to being conservative when it comes to the business of being a Marley. As an independent artist on his own label, Tuff Gong Worldwide, he says he is more concerned with making an impact with his music than making money.
“We’re lucky because my father left us with some money and we can sustain. But we still have to pay bills; we still have to work, obviously. We grew up with a mindset that money wasn’t the first, primary thing and that is what makes our music different.”
It is also the reason why he has mixed views about how his father’s legacy has been handled in the past.
“The business side of it is something we have to be very careful with; the profiting off of his name and likeness and things like that,” he said.
“There’s a fine balance with me and the rest of the family who might have other ideas or another way of thinking about it.”
Marley is focussed on developing his own projects to keep his father’s name alive – and this includes a follow-up to his pro-environmental graphic novel “Marijuanaman”, selling organic hemp products and producing other artists through his label.
“(My father) was an entrepreneur, he was a businessman – but a conscious one. Again, it wasn’t money, money, money – things have to be done for the right reasons and the right purposes, so we have to continue that legacy in that entrepreneurship way.”Advertisement

Here are some other comments:
Q: Are their disadvantages to being a Marley?
A: Everything comes with a positive and a negative. If people don’t like you or didn’t like you, it’s worse that your name is Marley (laughs). With the name Marley, they say, “Well because you’re a Marley you won a Grammy” and it becomes that thing. But most of all, really, it’s love. That’s the greatest advantage that being a so-called Marley gives us, based upon what my father has done (and what) my mother has done. People give a lot of love.
Q: In the past, you’ve done albums specifically for children. Why does reggae music appeal to them?
A: It’s really frustrating speaking to adults through music every time because adults’ minds are usually made up; they’re usually set in their ways. So the philosophy is speak to children too, because children’s’ minds are open. For the next generation, there must be something that changes, that makes the world a better place. So children are a real deal. You have to speak to children.
Q: You support the legalization of marijuana in California, where you live. Why?
A: I just support the plant in all its aspects. Marijuana side is one thing, smoking, medical, recreational. But then there’s the hemp side of it, which is industrial, biofuel and nutrition. It’s an environmentally friendly way to make products. (Plus) we don’t drink alcohol, we’re not like some guys who, when they have a hard day, they can go and get a pint. I don’t drink pints. So what does the earth have for me? What can the planet give me? I don’t do hops so the planet must have something for me too!
Q: It would have been your father’s 70th birthday next year – do you have plans to celebrate it?
A: We never grew up with a big celebration of birthdays because it’s kind of selfish. I guess we grew up in such a way. So for the 70th we might do something musical for the people. But personally? I just give thanks every day.