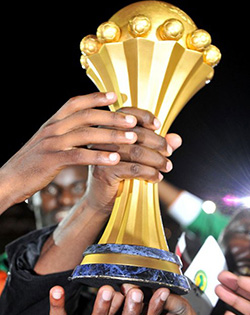 ZIMBABWE is set to lose out in the bidding for the Africa Cup of Nations 2017 after the Confederation of African Football (CAF) stated that the contest was limited to countries that have previously hosted top football tournaments.
Zifa chief executive officer Jonathan Mashingaidze returned to Harare on Tuesday after formally submitting Zimbabwe’s bid that will compete with Kenya, Tanzania, Ghana, Egypt and Algeria.
Zifa had courted Zambia for a joint bid but were shunned and Botswana, after getting the specifics of the bid details, also pulled out together with Ethiopia.
The latest developments were revealed by Ethiopian Football Federation (EFF) president Junedin Basha when asked by Supersport why his country had pulled out of hosting the finals, that initially set for war ravaged Libya.
“We had wanted to put up a bid but after several discussions with Caf Executives we decided to shelve the plans and prepare for 2020 CHAN and 2025 since we are not yet ready with the infrastructure that includes stadiums which are still under construction,” said Basha.
“It’s important to note that the 2017 bid was specific for countries that have managed to host top football tournaments and have existing facilities which we don’t have.
“It is one thing to just put a bid and it’s another thing altogether having a serious bid that has met all specifications.
“And after advice from Caf executives which we found to be very positive we decided, as a federation, not to bid for 2017 and I can say no East African country has a realistic chance since Ethiopia was the last country to host in the early 60’s.
He added: “We understand so many Ethiopians have dreams of such a big football tournament …
“… but it’s also important to prepare well and avoid heartbreak from a failed bid that is why it was important not to present any bid but focus on the bigger picture.”
Zifa did not engage anyone from Fifa, but worked with ‘technocrats’ from the Ministry of Sport and Tourism to write the bid document.
Kenya and Tanzania, following Basha’s statement, also fall by the wayside leaving Ghana and Algeria as the main competitors as Egypt is also suffering from political uncertainty.
Ghana hosted in 2000 and 2008, but is unlikely to get it as Cameroon, although more in Central Africa, Ivory Coast and Guinea have been given the rights to host the 2019, 2021 and 2023 editions, leaving Algeria in pole position for 2017.Advertisement

Algeria last hosted in 1990, and according to sources, have already been asked to submit a detailed document on stadiums, accommodation, communication, security, immigration rules and regulations, among other key issues.