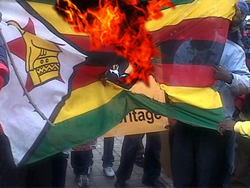 ZIMBABWEANS from all walks of life yesterday painted a gloomy picture of their future as the country today marks 34 years of independence.
The country celebrates its independence anniversary with the head of the British monarchy, Queen Elizabeth II and United States President Barack Obama joining the rest of the world in congratulating Zimbabwe.
But for most Zimbabweans, there was nothing to celebrate as economic problems were taking a toll on their lives.
Only a few were enjoying the fruits of independence.
People interviewed by NewsDay yesterday said the only good thing to celebrate in Zimbabwe was the prevailing peace.
However, they were worried that the majority of the people in the country still lived in abject poverty and their rights were being trampled upon by the government.
Kariba Incorporated Residents and Rate Payers Association executive chairman Sam Mawowo said nothing was worth celebrating as only 2% of residents in the town were allocated land.
“The only independence we can talk of is a peaceful environment, but if we were to talk of economic emancipation, a few people from Kariba have benefited,” Mawowo said.
“Only 2% of the Kariba population benefited from the land reform programme and we have noticed that independence is being enjoyed by a few top politicians who are in turn trampling on people’s rights through enactment of bad laws.”
Mawowo said an example were demolitions of houses for poor people without offering them alternative accommodation which was a human rights violation.
He said the people of Kariba had over the years watched deterioration of infrastructure such as roads, water systems, and poor service delivery.
“There is a lot of corruption at local authorities, and the majority of people who voted government into power are jobless and there is no meaningful empowerment at all,” he said.
Zimbabwe National Students Union (Zinasu) spokesperson, Avoid Masiraha said the only independence to talk of was political independence because civil rights were being compromised.
“The education system has gone down with exorbitant fees being charged at schools and higher learning institutions. We do not see the fruits of freedom that was fought for because students are denied rights to demonstrate peacefully and many youths are unemployed,” Masiraha said.Advertisement

“We are not really free because there is no freedom of expression and people are victimised for supporting certain political parties. Some provinces such as Matabeleland are still marginalised and we cannot talk of real freedom.”
Coalition Against Corruption director Terry Mutsvangwa said the only freedom was from colonial rule, otherwise the true gains of independence were still not realised.
“True independence means access to basic human necessities such as housing, health and education. The youth are still marginalised and corruption has negatively impacted on the economy. Independence without the majority of people benefiting from the country’s mineral wealth is meaningless,” Mutsvangwa said.
National Constitutional Assembly (NCA) spokesperson, Madock Chivasa said 34 years after attaining independence from British rule, there was still inequality and oppression where the interests of the minority were the ones being safeguarded.
“The very basic freedoms such as the right to vote which essentially form the basis for legitimate democratic rule will be continuously undermined by the new Constitution that entrenches Zanu PF dictatorship in Zimbabwe,” Chivasa said.
“The majority of Zimbabweans are poor and unemployed as a direct result of incompetence and corruption of the Zanu PF government since independence.”
He said 34 years after independence blacks were poorer with national programmes such as the land reform and indigenisation having benefited Zanu PF cronies.
A Zimbabwean living in the United States, Tichaona Wandaza said independence ushered in a good education system for black people who previously had difficulties accessing higher education.
“I admit there has been economic decline, but what we now need to do is work together to fix it and we will get there. It does not mean all of us have to play political parts to ensure change, but in our different roles we can help improve things,” Wandaza said.
Meanwhile, Independence Day wishes continued to pour in from different countries in the world.
President Obama in his congratulatory message said: “The United States remains committed to the people of Zimbabwe and will continue to support them as they work to build a society that responds to their needs and honours their democratic choices,” said Obama. “May the coming year bring progress toward a healthy and prosperous Zimbabwe.”
Queen Elizabeth II added: “It gives me great pleasure to send the people of Zimbabwe my congratulations on the celebration of your National Day, together with my best wishes for your happiness and prosperity in the coming year.”