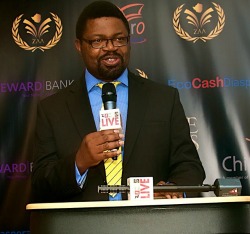 THE Zimbabwe Achievers Awards (ZAA) campaign moved into the homestretch on Friday with the live announcement of the nominees and headline sponsors for the 6th Edition of the event.
ZAA organisers announced that Ecocash, Chitoro and Steward bank, all part of the Econet group, will this year be the headline sponsors of the event which honours the achievements of Zimbabweans in the diaspora.
ZAA Vice Chairman, Zeb Manatse, said he was thrilled by the partnership and the journey ahead.
“We are delighted to welcome Ecocash, Chitoro and Steward bank as the new Headline Sponsors for the 6th Edition of the Zimbabwe Achievers Awards,” Manatse said.
He added, “The three firms’ involvement with ZAA only proves its on-going commitment to engaging and supporting the Zimbabwean community in the UK.
“We are honoured to have their support and we thank them for coming on board and being a part of the vision we have for ZAA.”
Organisers of the high profile event also announced over 80 nominees across 18 categories at a press conference held at Amba Hotel Marble Arch, London.
Nominations opened at the beginning of December last year, giving the public plenty of time to put forward those individuals or organisations they felt excelled in various ventures over the past year.

Voting will commence on the 25th of March and will run until the 29th of April. Thereafter, votes will be tabulated and verified by a ZAA Panel of experts who will arduously assess all the candidates and match up their achievements with the set criteria before whittling the list down to this year’s winners.
ZAA Panel Chairperson, Dr Martha Chinouya, said she was delighted with the positive response, and praised the public for the tremendous and well deserved nominations that were received for this year’s event.
“We would like to thank everyone who took their time to participate and nominate their peers. We received more than 2000 nominations, which is a huge increase from the previous year.”
“There were strong entries across all categories this year and after lengthy deliberations by the panel, we have emerged with an exceptional list of contenders who have distinguished themselves remarkably over the past year and are deserving of recognition,” Dr Chinouya said.Advertisement

The awards celebrate the accomplishments of individuals and organisations in fields that include business, sport, entertainment, arts and culture.

Profiles of this year’s nominees will be featured on zimachievers.com and will detail the remarkable achievements of the shortlisted candidates.
The Red Carpet Affair will be held on the 7th of May at the swanky five-star, Royal Garden Hotel, in Kensington. With breath taking views of Kensington Gardens, it too boasts views of the capital’s rooftops and iconic architecture. It also overlooks the spectacular Kensington Palace.
Providing an ambience of splendour, the venue has become home to the much anticipated event of the year.
Tickets are available for £65.95. The current discount has been extended to the 27th of March, and will then revert back to the standard price of £89.95.
ZAAUK CEO, Peter Soko, urged the public to take advantage of the current ticket discount before the offer ends.

“Our revised ticketing system has allowed our guests to choose their seats upon purchasing their tickets for the last two years, and this has proved to be a very popular and efficient system.”
“I would encourage all those wanting to attend to get their tickets and reserve the best seats in the house, as these will increasingly become limited over the next couple of weeks,” Soko said.
Now in its 6th year, the awards have become one of the most prestigious and significant events within the UK Zimbabwean community calendar, bringing together business leaders and innovators from all sectors to celebrate the outstanding achievements of people of Zimbabwean heritage who reside in the UK.
Zimbabwe Achievers Awards 2016 Finalists