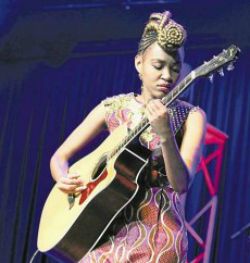 NOMINEES for the 2015 Zimbabwe Achievers South Africa have been announced with the winners set to be announced at a gala dinner pencilled for November 7.
The Zimbabwe Achievers Awards committee announced the list of nominees last Friday at the Zimbabwe Embassy in Pretoria.
According to the committee, the dinner will be held at The Hyatt in Rosebank.
On Friday night invited guests included Metro FM award winning artist Berita Khumalo who was nominated for the Music Artist of the year award for the second year.
Highlights of the evening included a hilarious comedy skit from renowned actor Leroy Gopal who was also the Master of Ceremony.
Zimbabwean Ambassador to South Africa, Isaac Moyo through the Consular General Batiraishe Mukonoweshuro, gave a hearty message to the evening guests in his vote of thanks.
MoneyGram Senior Marketing Manager for South and East Africa, Gabriel Wilson quoted Abraham Lincoln ‘“Any nation that does not honour its heroes will not endure.”
“Our association with the Zimbabwe Achievers is our token of support to the rewards of core values of hard work, resilience, dedication and triumph over adversity; values without which no nation can endure.
“ZAA is a noble cause and we would like to applaud not just the organisers for this initiative but also the Zimbabwean mission in South Africa for supporting this drive,” said Wilson.
In his speech, Zim Achievers Awards SA CEO, Richard Moyo, said: “The awards are not just about outstanding Zimbabweans who have flown the country’s flag high in South Africa but are a celebration of the African migration story that has affected millions across the continent.”
The Zim Achievers Awards are meant to celebrate the exceptional achievements of Zimbabweans living in South Africa, who are making positive contributions in their adopted country and beyond.
THE 2015 NOMINEES ARE:

Community Organisation of the Year

Young Achiever of the year

Organisers said voting was already open to the public and will end on the 11th of October 2015. The public can vote on each of the listed categories through www.zimachievers.co.za