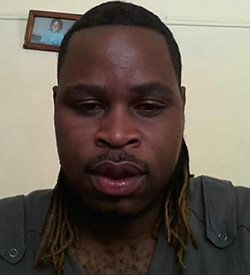 IT seems Pokello Nare’s attempt and success at using her naughty girl antics backed by a leaked sex tape with renowned rapper Desmond Stunner Chideme has inspired other wayward artistes to want to use controversies around them to gain fame.
Latest to try this route to world-wide fame have been the antics of Hilary Indi, made famous on the now forgotten soap Studio 263 where he played the character of James Chari.
Indi’s real name is Tafadzwa Gregory Hilary Tandi.
Forget his recent courtship with the media for alleged fraud as a wedding planner allegedly for Bona’s wedding.
The actor was a nuisance as he waited his turn to audition for Big Brother Africa’s next season which commences in September in South Africa, by wanting to ride on his age old controversy in the past.
“He kept strutting along the passageway and being loud saying if he gets into the house he would fearlessly wear high heels and a see through dress on his way into the house and towards fame. He kept saying he would be the housemate to watch,” said a source.
Apparently, the ‘bad boy’ wild card which he played at the auditioning was his 2005 controversy widely publicised in the media which got him in bad light.
Indi was reported to have been trapped and recorded on endless hours of audio tape as he made sexual advances asking out a boy then only identified as ‘Hope’ who was of school-going age using sexually explicit language and making sexual suggestions at what the two would do.
Uncomfortable at the late night calls the boy alerted his father who had then recorded the conversations and brought them to the attention of the media.
Indi accepted he had made the calls but said he was not serious and was just saying stuff in jest as he was seriously in a relationship and about to be married.
But he raised the gay innuendo yet again at the auditions saying to fellow auditioning folk he would be in touch with his metrosexual and eccentric self; thanks to high heels and a custom made see-through dress.
“At the end of it all he was just the laughing stock because everyone knew he was being dramatic. It takes a stand out person to make it to Big Brother like we saw with especially Pokello and perhaps he just wanted to ride on an already existing line,” said our source.
At the end of it all it remains to be seen whether the gimmick worked for him as it is still a closely guarded secret who eventually won the ticket to represent Zimbabwe in the DSTv screened popular reality show first weekend on August when it premieres.Advertisement