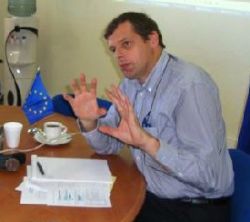 ZIMBABWE’s agricultural products exports to the European Union (EU) markets have exceeded 400 million Euros in the last three years, with fruits and sugarcane being the highest exported products, the EU’s representative in Zimbabwe has revealed.
“Last year, Zimbabwe exported exactly 400 million Euros to the EU, the bulk of that were agricultural products. More than 25% were traditional agricultural products-tobacco,” EU ambassador to Zimbabwe ,Philip Van Damme, told government officials witnessing the launch of EU-Zimbabwe international trade programme in Harare last week.
“In the past, Zimbabwe never managed to export sugarcane to the European markets; since 2012 Zimbabwe exports average between 50 and 100 million Euros of sugarcane to the European markets depending on the international prices and depending on weather conditions,” he said.
Ambassador Van Damme said Hides and leather products exports to the EU markets more than doubled over the past four years to 20 million Euros with exports of citrus products, mainly oranges, having increased to exceed 20 million Euros over the same period.
“The export of peas more than doubled to reach a record of 17 million Euros higher than ever exported even before the fast track land reform. Export of tea more than doubled over the last four years, exceeding 10 million Euros and exports of Avocadoes, peaches which were almost in-existent four years ago have now exceeded 4 million Euros exports,” he said.
Van Damme said all these achievements and increased business between Harare and the European markets could be boosted if Zimbabwe finalises the pending land ownership dispute.
Harare and Brussels are engaged in a bridge building dialogue with the land discourse being the main item on the agenda.
“Zimbabwe can still compete internationally, even in the EU market which is a highly competitive market, but to reach that high level of international competitiveness some conditions have to be met. If you look at the profiles of those who have managed to export to Europe you will see that they have managed to meet all the three conditions,” said Ambassador Van Damme.
“You need reasonable security of tenure on the land, you need capacity to develop in modern technology and you need to be professional so that you meet the international standards.”Advertisement