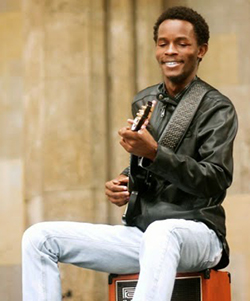 ZIMBABWEAN Afro-Folk musician, Munyaradzi Nyamarebvu, has been selected to be part of a cross cultural collaborative programme in the United States this September.
The programme, dubbed One Beat and coordinated by the US Department of State Culture, will also feature 25 other artists from across the globe.
In an interview with New Zimbabwe.com in Harare, Nyamarebvu said the fellowship recognised artists who use their music to engage with society and encourage freedom of expression
“One Beat mainly make their selection based on an artist’s excellence as a musician, openness to collaboration and the level of engagement with the society.
“One Beat seeks to engage music driven leaders who are committed to free artistic expression, collaboration and make a positive impact on local and global communities,” he said.
The program, Nyamarebvu explained, accepted applicants every year from interested artists of all age groups, both professional and non-professional
The musician, who plays with his band Roots Kalimba and sometimes plays solo, will be holding a farewell concert on August 26 at the Zimbabwe German Society.
The concert, dubbed “Farewell to America” is expected to be attended by high profile dignitaries who include German Ambassador to Zimbabwe Thorsten Hutter, Zimbabwe German Society Director, Roberta Wagner, American Ambassador to Zimbabwe, Harry K Thomas and Harare Mayor Bernard Manyenyeni.
“The purpose of this event is to acknowledge and further reinforce future collaborations with some of the organisations who have so far helped shape my career through various initiatives.
“These organisations include Goethe-Zentrum (Zimbabwe German Society), Pakare Paye Arts Centre, US Department of State: Arts and Culture and Magitarelive,” he said.
Nyamarebvu, who is currently in the studio to record his acoustic solo debut album titled Ndiri Ndoga (All Alone), said he was culture-centric and loved to advocate for the preservation of African Culture, Ubuntu and humanitarian issues through his music.
“My music genre is firmly rooted in African folk tradition with most influences from the rhythms of my home made traditional instrument, the mbira.
“Although my music exhibits a rich ethnocentric sound, I like to fuse traditional instruments with Western music instruments to give a traditional and yet modern musical sound,” he said.Advertisement

He said he composed, arranged and co- engineered all his sessions in order to make his music unique.
The Pakare Paye product, who has collaborated with international artists such as Wally Warning, an American –Germany based musician, German band, JAMARAM, and a few classical musicians in Munich, said he also initiated projects to benefit other upcoming musicians.
“I have an ongoing art project at Afro Pop Hall of Famer, Dr Oliver Mutukudzi’s Pakare Paye Arts Centre. The initiative called “Play it for Pakare” is a platform that promotes performing artists in the country who seek to show case their individual talents,” he said.