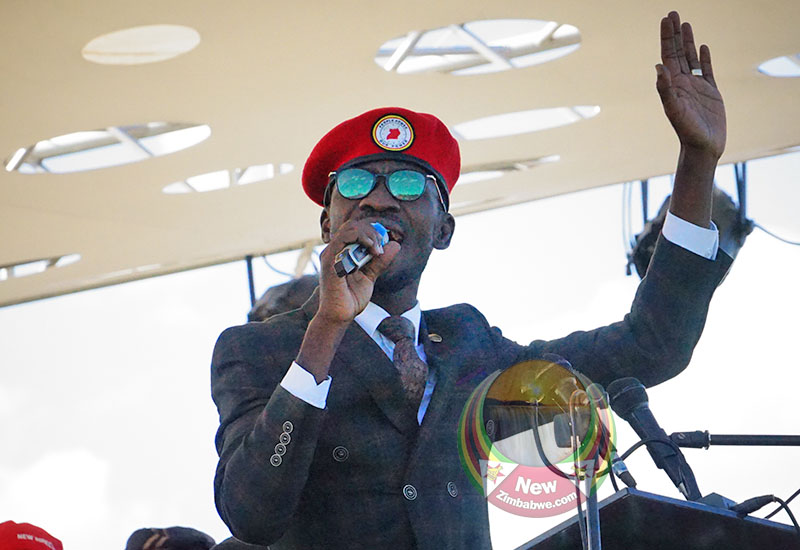 FIREBRAND Ugandan pro-democracy activist and musician, Bobi Wine was early Saturday forced to sign down by Zimbabwean authorities indicating he was not going to sing any of his inciting songs at the MDC Gweru elective congress where he was invited as main guest.

He revealed this while delivering his speech at the event late Saturday.

Bobi Wine, real name Robert Kyagulanyi Ssentamu, got a taste of the hostile side of Zimbabwean hospitality when he got detained for hours by authorities at the Robert Gabriel Mugabe International Airport when he touched down early morning for the MDC event.

“As I was entering Zimbabwe at the airport, I had to sign, an understanding that I am not coming to Zimbabwe to sing,” he said.

“I understand it because in some countries one has to get permission because I am known as a performer. I understood it.

“I also understood it because my music is not just entertainment. It is edutainment and that is why it has been banned in Uganda and other African countries that fear revolution through music,” said Wine, before singing a rendition of Giant Mama Land.

Apart from his revolutionary music that has unsettled Ugandan authorities, Bobi Wine is a popular politician, businessman, entrepreneur, philanthropist, freedom fighter and actor.

Wine’s music contains lyrics which critique the manner in which Uganda and other countries have been destroyed by dictatorship and corruption.

Wine and Orange Democratic Movement (ODM) representatives Babu Owino and Edwin Sifuna were detained at the airport for some two hours by state security agents who went on to demand that ODM secretary general Owino disclose to them contents of the speech he was going to deliver at the same event.

“I told them that I carry a message from my president, Raila Odinga and they can listen to my address today,” said Owino.

Odinga and late MDC leader Morgan Tsvangirai were close friends while their parties enjoyed mutual respect, having been in almost exact situations in Kenya and Zimbabwe.

At the Gweru event, a group of ZANLA liberation fighters pledged their allegiance to the MDC.