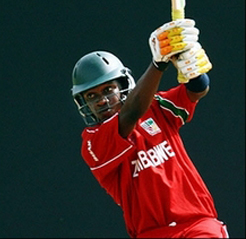 HARARE: Zimbabwe beat India by 10 runs on Sunday to draw the Twenty20 series 1-1 and prevent a clean sweep of their limited-overs tour by a young Indian side.
India, which won all three one-day games and the first T20, couldn’t chase down Zimbabwe’s relatively modest 145-7 in the final match of the tour at Harare Sports Club.
The under-strength India team, which toured without a string of top stars including Mahendra Singh Dhoni and Virat Kohli, finished on 135-9. Robin Uthappa top scored with 42.
Legspinner Graeme Cremer took 3-18 for Zimbabwe, the best bowling performance of the game.
Earlier, opening batsman Chamu Chibhabha maintained his run of form with 67 from 51 balls with nine fours to hold together Zimbabwe’s innings.
Bhuvneshwar Kumar and Mohit Sharma had two wickets each for India and Zimbabwe didn’t offer much else apart from Chibhabha’s half-century, which was ultimately enough. Fellow opener Hamilton Masakadza made 19 and only one other Zimbabwean, Sean Williams, reached double figures.
India’s batsmen struggled even more on the low, slow pitch to lose their first game in five in Zimbabwe.
Ajinkya Rahane, standing in as captain this tour in place of Dhoni, was out first over, and Murali Vijay made just 13.
Robin Uthappa hit nine fours in his rapid 42 from 25 deliveries at No. 3, and Stuart Binny made 24 to pick up a little momentum.
India, which tried out some new up-and-coming players on the tour, gave an international debut on Sunday to wicketkeeper-batsman Sanju Samson. He hit 19 from 24 balls but couldn’t put India in position to win, and Zimbabwe sensed victory when he was caught at long-on to leave the tourists on 117-7 in the 18th over.
In the end, the Indians needed 19 off the last over before Kumar was run out with three balls left.Advertisement