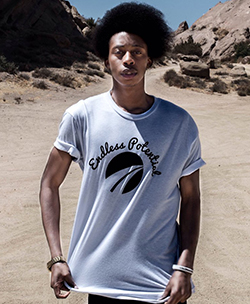 TREADING the well-worn path of leaving England behind, rising actor, singer and dancer Anesu Mutara has laid roots in Hollywood and shows all the signs of a megastar in the making.
The Bulawayo born star who has featured in a series of productions such as, The Intent and Reality TV show, Lifetime TV’s Dance Moms as a dance choreographer, knew that he wanted to venture into the performing arts world at a very young age.
“At the age of five, I remember always dancing in church and I loved it,” said Mutara.
“Music came later on in life as it was always something I wanted to do, but now being more mature and knowing exactly what I want, it makes it easier for me to pick and choose the kind of things I aim to pursue in my professional career,” he added.
After leaving Leicester College in the UK, Anesu spent time working out what he wanted to do and where he wanted to pursue his career, spending time taking vocal lessons and dance classes to polish his craft.
It was during this period that he made a decision to head to The USA to make his dream a reality. He was also presented with the opportunity of studying at the prestigious Stella Adler Art of Acting studio in New York.

“Moving to Los Angeles was certainly a bold choice; but taking that risk was purely based on knowing exactly what I wanted to do,” he said.
“The boundless amount of love and support from my mother, father and older brother was and has been so amazing in my pursuit.
“My father said to me right before I moved, that if my dreams were bigger than the city I am in, I needed to get out and that is what I did.”
Anesu secured some great agents when he got to LA, signing with Minc Talent Agent, Melissa Mangum – this is where he landed one of his biggest roles, featuring in an Apple commercial that is airing on multiple platforms, globally.
Mutara said landing the role and being the face of Apple Inc. for their newly launched product was an amazing experience for him.
“I can’t even begin to describe how much it meant to me, more so because I had prayed so hard for it and God answered my prayer.”
Anesu worked with a remarkable cast and crew both in New Orleans and Los Angeles where it was filmed.Advertisement

“The team were meticulous in their production, were a pleasure to be around, and it made the journey and experience worthwhile.
“I learnt about the amount of focus it takes to be on a set for 8+ hours a day under hot lights but, also being treated like a king,” he added.
Mutara was also a keen sportsman before taking on Hollywood, playing football for his local club. He spent time playing for football academies such as Birmingham City, Burton Albion & Cardiff City.
He said that he did have plans to go professional as a football player as the sport was and would always be one of his biggest passions.
“I still enjoy playing. I look to incorporate my skills as an elite athlete / football player with my work in TV and film.”
Since featuring in the Apple advert, Anesu has secured himself a few more TV roles and has recently starred in a commercial featuring some of the biggest NBA stars to promote the new NBA 2K18 game which is now available for pre-order.
Mutara is working on a number of projects in the next few months, due for release next year. He also has a series of TV and film projects lined up for 2018, including a movie which is set to be filmed in New York from January.
“The experiences I have had so far have made me want to work even harder to keep on getting more projects under my belt,” he said.
Mutara is also looking to pursue his music career and is due to release a number of independent projects for supporters and his fan base to hear on social media.
“My music career is going pretty well right now. I have a lot of music in the pipeline and I will be working towards releasing a number of them on bigger platforms soon.”