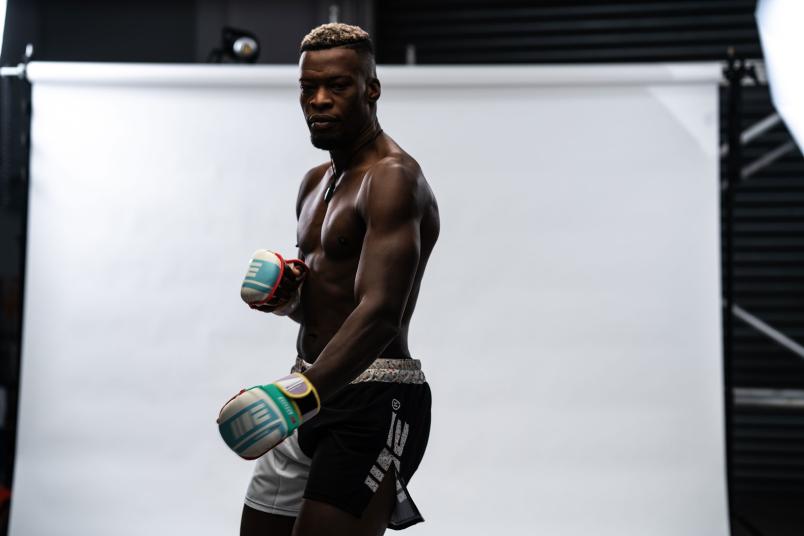 NAMES are important, particularly when you’re about to introduce yourself to millions, so to be clear: Mike “Blood Diamond” Mathetha wants to just go by his moniker.

It’s the first thing he requested when he got his UFC contract during the summer of 2021, and it’s the name he has gone by throughout his long kickboxing and shorter MMA career so far.

“(Blood Diamond) is something different,” Diamond told UFC.com. “It’s not too much to ask. I already pictured Bruce Buffer calling that name out, so it’s something I’m just really looking forward to.”

The Zimbabwe-born New Zealander is set to make his UFC debut at UFC 271 in Houston, Texas, he arrives with a highly touted kickboxing pedigree, and he has the right people in his corner to help him make the transition to the UFC despite just three professional MMA fights.

Diamond trains out of Auckland’s City Kickboxing, home to the likes of Dan Hooker and Brad Riddell as well as two fighters making the trip with him to also compete: Carlos Ulberg and middleweight champion Israel Adesanya, who is headlining the card. Like Ulberg and Adesanya, Diamond won New Zealand’s eight-man King of the Ring Tournament (twice, in fact).

He is keen on making his name known around the world, and on a smaller level, he wants to be more known and familiar to people than a particular 2006 film starring Leonardo DiCaprio.

“I want it to be like, you say, ‘Blood Diamond,’ and people say, ‘Ah, yes. That guy (is a) great entertainer,’” he said. “I enjoy giving a good show, so that’s it. A guy who has something different than everyone else, and he’s quite entertaining, and someone you want to see fight whether you want to see him win or lose, you just want to see him fight. That’s the goal. I want to build that name, ‘Blood Diamond,’ so big that when you type it in Google, I’m going to show up before the movie.”

Of course, that requires results, and although his record shows just three fights (and three wins), he has plenty of combat sports experience.

Diamond was with Adesanya during the champion’s stint in China early in their respective careers. The two lived together, cornered one another when they could and supported each other as they made their way up the fight game ladder.

“It was pretty much me and him back-to-back against everybody else,” Adesanya said on UFC Countdown.

“There were times it was just literally me and him in each other’s company, and sometimes, he’d be fighting at a different city and I’d be fighting in another city, and we wouldn’t have each other in our corner, so we’d just get someone as a water boy and corner ourselves. So, we’ve been through some adventures in China back in the day, so I feel like it’s his time now. He’s done the hard yards for years, so it’s his time now to shine under the bright lights.”

As his debut inches closer, Diamond said he is enjoying every single bit of the process. When he and the City Kickboxing team arrive in Houston for fight week, he hopes to soak everything in and not get caught up in the busy whirlwind of a pay-per-view week in the United States.

He has already experienced a little bit of turbulence when it comes to life in the UFC. His original opponent, Orion Cosce, pulled out of their matchup due to injury. Now, Diamond faces Jeremiah Wells, who is coming off an explosive second-round knockout of Warlley Alves in his own UFC debut. That’s all noise and nothing he and head coach Eugene Bareman can’t handle, though, so Diamond is riding the good vibes full speed ahead. He is thankful to have a couple teammates with him, making the memories even sweeter.

“Basically, the kings of New Zealand combat are fighting together,” he continued. “The three kings. That’s something exciting. I know for a fact that a lot of people will be supporting us. Looking forward to it.”

As far as the way he wants to portray himself in February, he hopes to show the “passion” he has for martial arts. He understands February 12 is the day a new chapter to his legacy starts, his first chance at making the Blood Diamond name one to remember for fight fans. In terms of the actual business of fighting, Diamond tells fans to expect “the unknown.”

While that might seem like a nothingburger of a description, it’s actually an honest one. Not even Diamond knows what he’s going to do once the Octagon door closes, and his fight footage supports as much.

“Sometimes, I don’t know, my limbs have a mind of their own,” he said. “So, sometimes, they just decide to go up when I am moving in an awkward position. The awkwardness of it, and not knowing what’s happening. It’s a surprise.”

The spotlight is always brighter on pay-per-view nights, and especially so when you come from a highly respected gym like City Kickboxing.

The team has been known to set the bar high for themselves on fight nights featuring several of their fighters. They’ve pulled off a 3-0 a couple of times – UFC 243 and UFC Fight Night: Felder vs Hooker – and UFC 271 is another such opportunity.

The expectations are lofty, and the simplistic comparisons to his teammates are to come, but Diamond expects all this.

As far as haters might go, he said he laughs at anyone “salty or throwing shade,” which is only going to help him when he walks to the Octagon for the first time.

He knows the stakes, and he expects to completely rise to the occasion and kick off the night the right way for his team.

“That’s the thing: pressure makes diamonds,” he said. “Bring on the pressure. I’m ready to shine.”