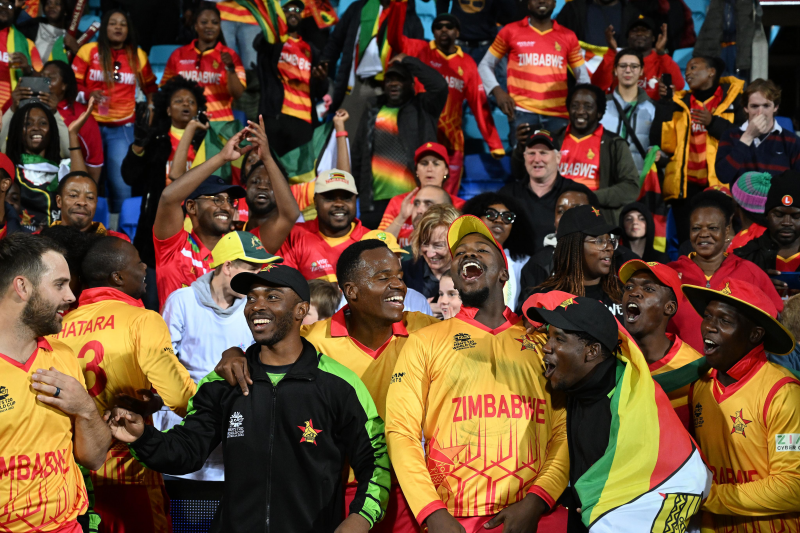 Zimbabwe made history by qualifying for the Super 12 stage of the ICC T20 World Cup for the first time in their history after beating Scotland by five wickets and nine balls to spare in a winner-takes-all Group B encounter at the Bellerive Oval in Hobart, Australia on Friday.

After restricting their opponents to a mediocre target of 133 runs had to overcome some early nerves after being reduced to 42 for three after eight overs.

However, man of the moment Sikandar Raza smashed a belligerent 40 from 23 balls, adding 64 with Craig Ervine, who made 58 runs off 54 deliveries as Zimbabwe reached 133 for five in 18, 3 overs to seal the win with nine balls to spare.

The win meant Zimbabwe progressed to the next stage in a T20 World Cup for the first time. By finishing top of Group B, they advance to Group Two of the Super 12s where they will face India, Pakistan, Bangladesh, South Africa and the Netherlands.

For Scotland, the defeat means they fail to emulate their performance of a year ago, when they reached the Super 12s at the last World Cup in the United Arab Emirates.

Ireland also advances from Group B, having beaten West Indies by nine wickets earlier on Friday.

Earlier in the first innings, Scotland scored 132/6 in their quota of overs. In form batsman, George Munsey scored 54 off 51 deliveries. On a wicket where the oddball was stopping a bit, the Scottish batter found it hard to score.

Incidentally, they failed to hit a six and managed only four fours after the second delivery of the seventh over – one of those was off a free-hit and another was leg-byes.

Zimbabwe’s new-ball pair Tendai Chatara and Richard Ngarava were excellent, while spinners Raza and Sean Williams bowled in tandem for a tight spell.

Zimbabwe have now won nine of their past 11 T20 internationals to go along with a one-day international defeat of Australia in September.

They progress with wins over Ireland and Scotland. Significantly, captain Ervine missed their defeat by West Indies and it was his calmness at the top of the order that guided the chase at Bellerive Oval.

When Ervine finally made a mistake and miscued left-arm spinner Mark Watt to mid-off, Zimbabwe only required 14 from three overs.

The super 12 round will start on Saturday with Australia taking on New Zealand in the opening encounter at Sydney.