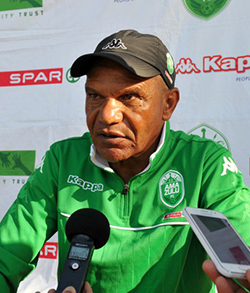 SOUTH Africa: AmaZulu coach Joey Antipas says he is not reading too much into the side’s Uthungulu Mayoral Cup triumph over the weekend.
Usuthu – who recently signed veteran striker Mabhuti Khenyeza – retained the trophy after edging top-tier neighbours Golden Arrows 3-1 on penalties in the final at Umhlathuze Sports Complex on Sunday.
Antipas’s men beat Bloemfontein Celtic 4-2 in the semi-finals, while Arrows defeated Thanda Royal Zulu 2-0 on penalties in their last-four tie.
“One thing for sure as a coach you’re never really happy,” Antipas told the club’s website.
“Although we won the tournament you always want to improve. Yes, we won but I know that we’ve still got a lot of work to do; but so far so good.
“We still want to bring in some players to make the team more competitive. In the two games I saw a lot of fighting spirit.
“The fact that we were 1-0 down in the game and came back 1-1 and again after being 2-1 down we were able to bounce back. The guys showed a positive attitude and quality.”
He added: “We mustn’t get too carried away though with this achievement because there’s a bigger picture ahead in the coming weeks.”
“Well done to the municipality and the organisers for staging such a good tournament,” concluded the Zimbabwean, who took over the reins from the sacked Steve Barker in the off-season.Advertisement