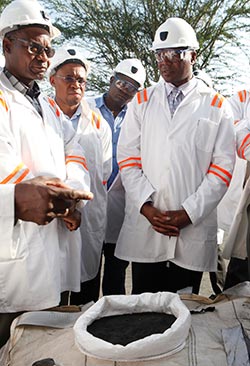 ZIMBABWE is willing to let foreign-owned platinum mining firms own majority shares in their local operations if they build a refinery in the country, the mines minister said on Thursday.
The country has the world’s second largest known platinum reserves but mining companies send the raw product to neighbouring South Africa for processing.
President Robert Mugabe has already forced the world’s two largest platinum producers, Anglo American Platinum and Impala Platinum Holdings, to agree to sell 51 percent of shares in their local units to black investors.
New mines Minister Walter Chidhakwa said that if platinum producers came together and established a refinery, which the local mining chamber says will cost at least $2 billion to build, the government could allow the mines to own more shares.
Chidhakwa said there was room for negotiation with mines, pointing to a deal signed in 2010 that allowed the African unit of India’s Essar Group to own 54 percent of Zimbabwe Iron and Steel Company (ZISCO) as an example of Harare’s flexibility.
“The government is simply saying that the guiding principle is 51/49 percent but if the investment does something to this country that can convince us to graduate or move away from the 51/49 percent, we will do so,” Chidhakwa told Reuters in an interview.
“And I think that in so far as in establishing a platinum refinery in Zimbabwe is concerned, yes, I think there is that flexibility,” Chidhakwa said during a visit to mines owned by Implats unit Zimplats in Ngezi.
Chidhakwa’s comments contrast those of new youth economic and empowerment minister Francis Nhema.
He told Reuters last week that Zimbabwe was not softening its empowerment drive against foreign-owned mines, although it could be flexible with banks if they agreed to lend more.
The 89-year-old Mugabe, president since Zimbabwe’s independence in 1980 and re-elected in July, has said the country may halt exports of raw platinum to South Africa to force mining companies to build a local refinery as a two-year deadline has expired.
Zimbabwe produced 350,000 ounces of refined platinum in 2012 – 6 percent of world production, according to the Chamber of Mines, the country’s mining industry lobby group.
The Chamber has said Zimbabwe would need to raise platinum output to 500,000 ounces a year to justify a refinery.
Chidhakwa said the platinum refinery would be a national project that should be jointly build and owned by platinum mining companies as well as the government.Advertisement

“Because we want it as a national project, we also have to think about ways of supporting it, facilitating it, whether in financial terms or in tax terms,” said Chidhakwa.