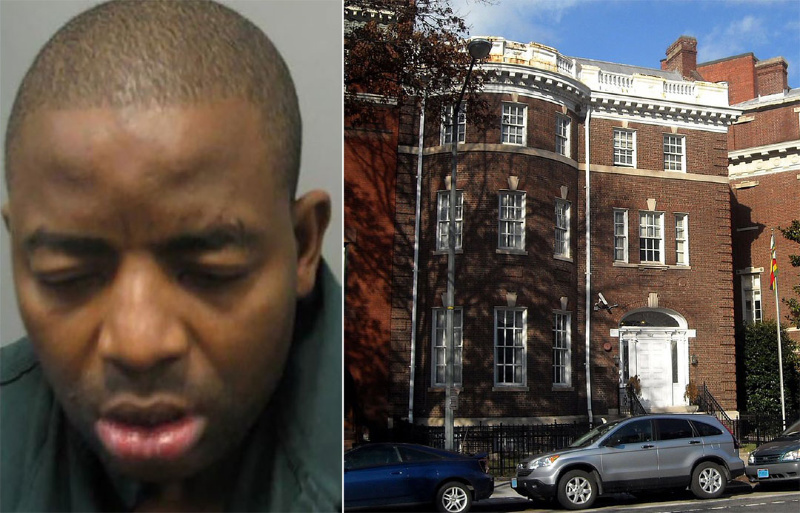 A Zimbabwean diplomat who barged into a home in Montgomery County, United States, while shouting incoherently has avoided a jail term of up to 50 years after he was granted diplomatic immunity.

Macmillan Moyana, 35, of Beauvoir Court in Derwood, shouted ‘Madam, Madam! It’s you, It’s you’ while banging on the door of a woman along Tulip Drive in Gaithersburg, Maryland, at 2:20AM on a Friday in late January.

The woman went to her front door, and cracked it open, thinking it was a friend, family member or neighbour in need of assistance, ABC’s Washington D.C. affilliate, WJLA TV, reported.

“That is when the suspect tried to bumrush the door, forcing entry into the house, hitting [the victim] with the door as he did,” court documents state, noting the victim was still “foggy” from being awoken unexpectedly.

“[The victim] stated that the suspect broke the panel of the door but she was able to force him back and lock the door.”

The man at the door, later identified as Moyana, continued to shout “Madam!” from outside the home as the victim called the police. He then allegedly went window to window, banging on them loudly while the victim spoke with dispatchers.

“[The victim] believed she and her two young children were in grave danger and feared for their lives,” court documents add. “[The victim] thought the suspect would break a window as he banged on them, gaining entry before help would arrive.”

Police dogs located Moyana in a woodline adjacent to the victim’s home. He was reportedly “screaming and yelling” while running around. Officers ordered the 5-foot-8, 80kg man to the ground, and then placed him in handcuffs. Officers conducted a “show up” where they asked the victim to positively identify Moyana as the man who tried to invade her house.

“When [the victim] saw the suspect, her body language changed all over again as she stated, ‘That’s him!’” court documents recount.

Moyana was held at the Montgomery County Detention Center on charges of home invasion, second-degree assault, third-degree burglary, reckless endangerment, and trespassing. All five counts carried a combined total of up to 50 years in prison.

Within hours, a court commissioner granted Moyana a $10,000 unsecured personal bond. That allowed him to walk out of jail without putting down any money.

According to court documents, Moyana is the counsellor of the Zimbabwe embassy, a title he had held for approximately a month at the time of his arrest. Ediplomat.com describes an embassy counsellor as “a senior diplomatic title, ranking just behind an ambassador and a minister.” In fact, in many smaller embassies, the counsellor is the “number two man.”

In a February 14, court filing, the Montgomery County State’s Attorney’s Office stated it had “decided not to go forward with prosecution.”

“Please set the above-captioned case on the docket on the earliest possible date for the entry of Nolle Prosequi,” the document, signed by Assistant State’s Attorney Kathy Knight, reads.

Spokesman Ramon Korionoff confirmed that prosecutors dropped all charges against Moyana due to diplomatic immunity.

Reached by telephone Thursday afternoon, a woman at the embassy — located along New Hampshire Avenue in Washington D.C. — stated Moyana recently returned to Zimbabwe. She declined to answer any other questions.

“Moyana is in Zimbabwe. That’s all I can say,” the woman stated before ending the phone call.

It is unclear if Monyana was under the influence of drugs or alcohol on the night of the alleged incident. – WJLA