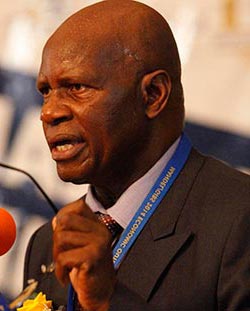 FINANCE minister, Patrick Chinamasa on Friday said government will maintain the multi-currency system introduced five years ago until certain macroeconomic fundamentals, including the build-up of forex or mineral reserves, were addressed.
There had been speculation about the return of the Zimbabwe Dollar since Zanu PF’s election victory last year due to tight liquidity conditions as the economic recovery falters.
“The multi-currency regime is here to stay. We cannot talk about introducing a local currency until certain macro-economic fundamentals are right,” said Chinamasa during the launch of The Source news agency on Friday.
He said some of the issues to be addressed were that of building up reserves, which government had committed to, as part of its International Monetary Fund staff-monitored programme which seeks to help improve the government’s management of the economy.
A staff monitored programme is an informal agreement between a government and IMF staff to monitor the implementation of a particular country’s economy. It does not entail resumption of funding from the multilateral finance institution.
Zimbabwe’s estimated $6 billion external debt, according to official data, precludes access to new credit from international lenders.
“We need to build some reserves, it could be of foreign currency stashed away as a fall-back position, it could be gold, diamonds, platinum – some reserves to anchor any currency that we may want to introduce in the future,” Chinamasa said, adding that he had grown weary of answering questions on the return of the local currency.
“Each week and almost maybe until a few days ago, the same people had been repeating that I am about to introduce the Zimbabwe dollar. And if you just analyse those statements you then realise that its either out of mischief or complete undermining the economy,” he said.
“Even if I wanted to do it, you can’t do it overnight and it can’t be a secret anyway. As you know it requires a lot of money.”
Chinamasa also called for the “complete” removal of sanctions imposed by the West, which insists they are targeted at individuals accused of undermining human rights and democracy, to enable Zimbabwe to trade and operate in the global market like any other country.
Zimbabwe’s relations with western governments broke down in 2000 over allegations of human rights violations and electoral theft against President Robert Mugabe and his Zanu PF party, charges which he denies, but ties have thawed in recent times.Advertisement

The EU has lifted sanctions, mostly travel bans and financial restrictions, on all senior Mugabe allies, but still maintain them against the veteran leader and his wife, along with a state-owned arms firm.
Chinamasa, who said Zimbabwe should not act as if the world owes her a living, conceded that the country would only be able to access funding from the Paris Club once it had met the requirements under the IMF staff monitored programme, whose targets – such as cutting the wage bill – the government is struggling to achieve.
The finance minister said the government’s five-year economic blueprint ZimAsset, which requires $27 billion to revive the country’s key mining, manufacturing and infrastructures among others, would need more time to be implemented beyond the initial timelines.
Chinamasa said the manufacturing and infrastructure sector were in dire need of capital.
“We need complete overhauling, complete retooling and which is why we need Foreign Direct Investment and they (investors) don’t come to a country where all you hear is negative news,” he said.
Chinamasa said investor interest, particularly on the Zimbabwe Stock Exchange, remained significant, adding that there government had made progress in its bid to reform the bourse, which currently operates as a mutual society, owned and run by stock brokers.
“We have had very successful meetings with stock brokers and have agreed that we demutualise it. We have agreed also that we should have it listed on the stock exchange as a public company,” Chinamasa said.