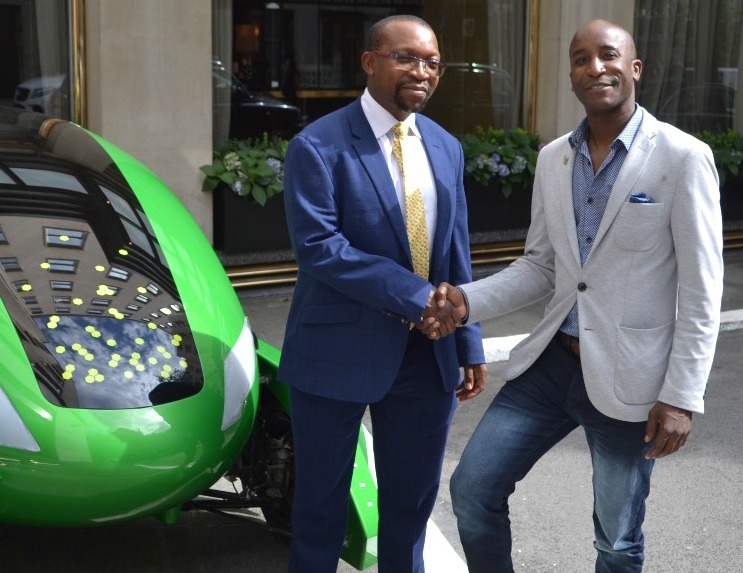 British-Zimbabwean businessman Byron Fundira, an early investor in the Kar-go project pictured at the launch with William Sachiti
Spread This News

ZIMBABWE’S William Sachiti and his team at the Academy of Robotics have launched Europe’s first roadworthy autonomous delivery vehicle, “Kar-go” which aims to reduce the cost of last-mile delivery by as much as 90 percent.

In the first week of its launch, Kar-go has been hosted by the Duke of Richmond and praised by both the Duke and Zimbabwean dignitaries including Zimbabwe’s Foreign Affairs Minister Sibusiso Moyo and Zimbabwe ambassador to the UK Christian Katsande.

This electric, self-driving vehicle was selected by the team curating FOS Future Lab for the Goodwood Festival of Speed (FOS) as an emblem of the future.

The Festival of Speed is an annual event dubbed motorsport’s ultimate garden party, as it takes place on lawns and paddocks of the Duke of Richmond’s Goodwood estate.

The Duke hosts motoring enthusiasts from around the world who flock to see the latest concept cars to classics.

FOS Future Lab is the Duke of Richmond’s latest addition to the Festival of Speed and has become a centerpiece of the event.

The man behind this unique concept vehicle is Zimbabwean-Brit, William Sachiti, from Harare.

Having exited his first start-up (123-registration) at 19, team leader William Sachiti (34) has since founded and exited 3 businesses including Clever Bins, a business he pitched aged 24 on the BBC Dragon’s Den show.

Before he turned his attention to AI and robotics his last business, MyCityVenue was acquired by Secret Escapes in 2015.

During his visit to the UK, Minister Moyo together with ambassador Katsande made time to meet Sachiti.

The dignitaries inspected the Kar-go vehicle at an exclusive reception and hosted by the Westbury Mayfair hotel in the prestigious Mayfair district where William was speaking at an event on the future of transport alongside leaders from the automotive industry.

At the reception, organised by Conrad Mwanza and the Zimbabwe Achiever Awards (ZAA) team, the party discussed the Kar-go technology and William and the team’s work to make the technology internationally applicable.

The reception was supported by British-Zimbabwean businessman Byron Fundira, an early investor in the Kar-go project, who was introduced to fellow ZAA winner by Conrad Mwanza.

Kar-go works in conjunction with an app, where recipients can track their delivery and meet the vehicle just like meeting a pre-booked taxi.

Recipients will then use the app to open the hatch to release their specific parcel. Inside the vehicle, a patented package management system will sort and re-shuffle packages on the move.

Powered by Tesla batteries, Kar-go can drive at 60mph and cover around 120 miles before it needs re-charging – around the same distance as an average delivery driver covers daily.

Travelling at up to 60mph, the vehicle has been developed in collaboration with the UK’s vehicle licensing authority, the DVLA, to travel on the roads.

Sachiti who moved to the UK aged 17 remains close to his family back in Zimbabwe and frequently returns. As part of the vehicle’s development, Sachiti “trained” the Kar-go technology to operate on roads in Zimbabwe.

Academy of Robotics Founder and CEO, William Sachiti explains: “There are some great delivery robots out there, but most of them are designed to run on neat pavements or sidewalks of grid-like cities.

We want Kar-go to be universally applicable, so we have trained our technology in a number of different environments and of course, for me, Zimbabwe was a natural choice.”

The launch of Kar-go attracted international media attention with camera crews from Reuters, BBC and CNN all in attendance and influencers including the Founder’s family, his brother, R&B star, Kwaye and his sister Shingai Shoniwa, lead singer of the Noisettes, who has written and performed for motoring brands such as Mazda and Ford.

Kar-go has already attracted significant interest in investment from China, the UK, Australia, Germany and Switzerland and the Academy of Robotics is in discussions with a number of retailers and logistics companies with commercial trials for Kar-go on the roads in the UK planned in the next few months.

Sachiti, adds: “We have had a number of very promising conversations with potential partners and investors and we are confident that Kar-go will be on the streets in a few months with a series of trials with high street retailers and logistics brands to follow. We are very grateful for the support we have received both in the UK and from the Zimbabwean community.”

Starting out of a university campus in Wales, the Academy of Robotics now has offices in London, Brighton and Wales and has successfully filed several patents for its autonomous technology.