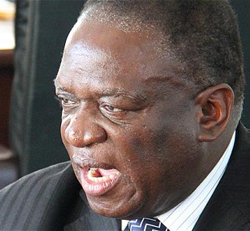 THE southern African nation of Zimbabwe has fallen off the international radar screen in recent years, but alarm bells should be ringing loud and clear.
Over the course of the past few months, we have witnessed an ominous series of warning signs: bitter political infighting within the country’s ruling party, the worsening of already deplorable economic conditions, the abduction and disappearance of a prominent human rights activist, and a surge of inflammatory rhetoric and political violence.
According to a report by the United States Holocaust Memorial Museum, these are all telltale signs of growing atrocity risk — and precisely why the United States, and its allies, must wake up and take a proactive stand.
Political violence has long shaped the landscape of Zimbabwe, home to an estimated 14 million people.
After a bloody liberation struggle against British colonial rule, Robert Mugabe, the only head of state Zimbabwe has ever known, spoke of reconciliation, peace, and social cohesion at independence in 1980. Mugabe’s words, however, brazenly belied the reality on the ground. Wartime emergency measures were kept in place, and we now know that plans for massacres against the Ndebele people in Midlands and Matabeleland provinces — what would later be known as Gukurahundi — were well underway. This calculated campaign of terror against an ethnic minority, executed with assistance from North Korea, was a key component of Mugabe’s plan to eliminate any opposition to his Zimbabwe African National Union-Patriotic Front (ZANU-PF). This scorched-earth campaign left at least 20,000 people dead and thousands more displaced. Thirty years later, no one has been held accountable, and the perpetrators remain in positions of power.
For a brief moment during Zimbabwe’s coalition government, from 2009-2013, the situation seemed as if it might be improving. The shattered economy stabilized and slowly began to recover, political space re-opened, and the most blatant forms of state-sponsored aggression declined. In reality, however, ZANU-PF and Mugabe were merely adjusting their tactics: Instead of physically assaulting opposition leaders in front of TV cameras, they undermined their influence through manipulation of the courts; instead of firebombing newspapers, they quietly intimidated the media and civil society activists; instead of beating up and maiming opposition supporters, they craftily rigged the polls to win the vote in July 2013. This more subtle approach worked, even leading to a softening of European sanctions earlier this year.Advertisement

Over the past several months, however, the mood in Zimbabwe has markedly changed.
On March 9, prominent human rights defender Itai Dzamara was abducted in broad daylight. Diplomats claim that his disappearance bears all the hallmarks of an operation by Zimbabwe’s intelligence services, which has long operated with impunity under the direction of Mugabe and his security chiefs. More than two months later, Dzamara remains missing. Not only have the police ignored a High Court judgment, which ordered them to provide bi-weekly updates on the investigation and search for Dzamara, but a government minister went so far as to suggest that Dzamara staged his own disappearance.
Dzamara’s abduction is not an isolated incident. Zimbabwe’s history is replete with examples of human rights and opposition political activists who have been abducted, tortured, forcibly disappeared, or murdered by state agents. Most recently, on April 26, ruling party operatives publicly assaulted six traditional leaders at a campaign rally in Mashonaland, in full view of the police, for supporting an independent candidate running for local office. Two of the headmen have been reported missing by the local press.
The recent uptick of incendiary rhetoric espoused by leaders in ZANU-PF has also raised red flags. Earlier this month, for example, Zimbabwe’s current Vice President Emmerson Mnangagwa, while on a campaign stop in Midlands, likened Zimbabwe’s political opposition, the Movement for Democratic Change (MDC), to Satan, announcing to the crowd “we have come to cleanse you of the sins of the MDC.” Importantly, Mnangagwa — who is also minister of justice and the most likely successor to the 91-year-old Mugabe — was a chief architect of Gukurahundi as then-minister of intelligence.
This type of dog-whistle rhetoric —including from Mugabe himself — is eerily reminiscent of Zimbabwe’s dark past. The ethnically-charged words are strategically chosen: meant to strike fear in the hearts and minds of would-be voters, but also to send a clear warning to those in ZANU-PF who might challenge Mugabe’s authority. In December 2014, for example, during the height of a frenzied intraparty struggle for power, Zimbabwe’s longtime vice president and liberation war hero Joice Mujuru — nicknamed “Spill Blood” — was ousted after allegations that she had planned to assassinate Mugabe. To date, Mujuru has maintained that the accusation is false and many observers, both inside Zimbabwe and out, believe the smear campaign was part of a more sinister plot to neutralize a political rival who had been gaining popularity.
Even prior to this latest incident, Mujuru knew full well the ramifications of crossing Mugabe and ZANU-PF, whether intentional or perceived. Her late husband, Solomon Mujuru, a highly revered figure in Zimbabwe’s liberation struggle and former defense minister, was killed in an eerily suspicious house fire in 2011. Following Joice Mujuru’s political demise this past year, the first lady of Zimbabwe and current chairwoman of the ZANU-PF Women’s League, Grace Mugabe, declared that if Mujuru were killed, “dogs and fleas would not disturb her carcass.”
In Zimbabwe, this type of odious rhetoric has often coincided with political violence: It was a common tactic deployed during land invasions in the early 2000s, during a forced “urban clearance campaign” in 2005, and exemplified by targeted political attacks during and after the 2008 election period, when Robert Mugabe lost a first round but then unleashed a cascade of violence to force the opposition to withdraw.
The latest developments in Zimbabwe come at a time when the country’s economy is again collapsing and the political elite are tearing themselves apart in a battle for succession. Monitors of mass atrocity risk typically watch for ethnic exclusion, hate speech, and indicators of political and economic stress. The greatest indicator of a country’s atrocity risk is whether it has suffered from similar events in the past. All of these factors are currently, and ominously, present in Zimbabwe.
This is a dangerous moment for the citizens of Zimbabwe, and for the southern African region writ large.
This is a dangerous moment for the citizens of Zimbabwe, and for the southern African region writ large. The United States government recently dispatched a delegation, including one of the State Department’s top human rights officials, to Harare. But the Obama administration will need to keep a keen and close eye on the ongoing events in Zimbabwe, including tasking the intelligence services for an assessment of the potential for mass violence. This should include elevating the issue of Zimbabwe to the president’s Atrocities Prevention Board, which can readily address the early warning indicators of mass atrocities that currently prevail. Just as important, authorities in the capital, Harare, must know that the world is watching. Preventative steps must be taken now by engaging with the African Union (which Mugabe currently chairs), other African heads of state, as well as the United Nations Security Council to dissuade the Mugabe government from going down this tragic road once again.
Mugabe and his inner circle of ZANU-PF loyalists must also understand that those who continue to commit violence against their own people will ultimately be held accountable. The United States and its allies should make it profoundly clear, both publicly and in private, that visa bans, asset seizures, and even war crimes prosecutions are all viable policy options that remain on the table.