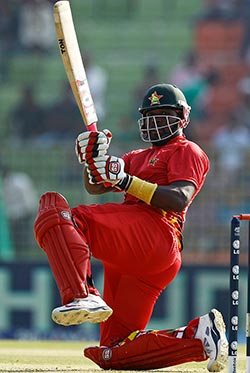 Ireland 164 for 7 (Stirling 60, Panyangara 4-37) beat Zimbabwe 163 for 5 (Taylor 59, Dockrell 2-18) by three wickets
SOME say the phrase “The luck of the Irish” refers to the good fortune enjoyed by the citizens of that country when they took up mining, with much success, in the United States. Others say it was coined in irony, to reflect on the potato famine and wars that affected the country so badly. After their last-ball win against Zimbabwe on St Patrick’s Day, Ireland’s cricketers will be inclined to believe the former.
They restricted their Full Member opposition to what was considered a below-par score on a ground hosting its first international match. In response, they seemed to be having their own St Patrick’s Day parade, coasting towards a win at 61 without loss after the Powerplay and 99 for 1 at the halfway stage. Then, they started to stutter.
Tinashe Panyangara, who went for 18 runs in his first over, changed ends and delivered a double-wicket maiden in the 15th over to drag Zimbabwe back into the game. Brendan Taylor made the bowler change ends again for his third over and Kevin O’Brien took 15 runs off Panyangara before falling on his sword in the 18th over. Still, Ireland needed only seven runs off the last two overs. Zimbabwe needed a miracle.
Tendai Chatara had bowled intelligently to that point with 17 off three overs and a wicket. He understood the conditions called for a change of pace. With a slew of slower balls, he gave away only three in the penultimate over. Ireland needed four off the last six.