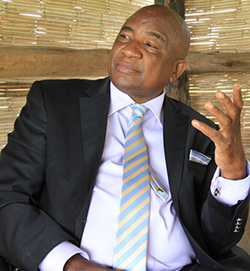 ALL I know of Phillip Chiyangwa is from the stuff I’ve read or heard – the much talked about vast wealth and, to borrow a cliché long associated with him, the perceived flamboyance.
I have never personally encountered the man, and I’ve never harboured any desire to.
Chiyangwa and I (until very recently I must say) live in two totally different worlds; me, a lowly newsman immersed into the world of sports and him, a property tycoon said to be one of Zimbabwe’s richest people.
I’ve been fortunate enough in my sports journalism career to have privileged close-up access to top international and Zimbabwean sports personalities at home and abroad and enjoyed hearty chats with a lot of them in the process.
Logically, because of a life consumed by sport, it is from these circles that I draw most of my inspiration and choose my role models.
So I have nothing personal against Chiyangwa, and I daresay he wouldn’t be aware of my existence either.
That point hammered home, I will frankly declare that my reaction on reading of Chiyangwa’s candidature for the upcoming Zimbabwe Football Association (Zifa) presidential elections was one of disdain and utter disgust.
I will not be drawn into commenting on Chiyangwa’s administration skills in his other different managerial roles – that is not what this piece aims to achieve and I’m sure there are others better qualified to do so.
But in the post he now seeks – leadership of Zimbabwean football – Chiyangwa has demonstrated quite clearly before even assuming office that he lacks understanding of the finer intricacies of the game.
And that Chiyangwa has not played football, administered it or previously seen anywhere near where the game was played does not influence my attitude a bit. As much as I was initially willing to accept the possibility that I could be wrong, the more convinced I got that he, in fact, is not the right man to head an association governing this national pastime called football.
I challenge you to take a look at how he has been going about his campaign, especially those selfies circulating on WhatsApp and other social media networks.
I’ve come across most of these video recordings with amazement at the man’s weird antics, but the installment that really nudged me to start clicking away at my keyboard is one recently forwarded to me by a friend in which Chiyangwa is filmed alongside Eddie Chivero of the Zimbabwe National Soccer Supporters Association and an unidentified associate. In the video, Chiyangwa bafflingly promises “to take Zimbabwe to Fifa and Caf” if elected Zifa president.Advertisement

“Tiri kuda kusvikawo ku Fifa… iyi iplatform chete yekuti tiendewo kupi? … ku Caf, Caf, Fifa! (we want to reach Fifa…this is a platform for us to go to Caf, Caf, Fifa!”)
Astonished by Chiyangwa’s rather meaningless statement, the accompanying text from my friend was:  “Hanzi we need to go kuFifa, Caf. What is he saying?”
Zimbabwe is a member of both world football governing body Fifa and the controlling confederation of the game in Africa, Caf.
“Perhaps he meant to say Fifa World Cup and Caf Africa Cup of Nations!,” I sarcastically responded.
Quick as a flash, came the sharp retort from my friend: “Ah come on man, he will be so chuffed with himself if he was able to say that!”
One of the characters in the video, Eddie Chivero, who probably thinks we all suffer from a high susceptibility to memory loss, seems to suggest that Chiyangwa must be voted in as Zifa president because of his wealth.
“Bhora riri kunetsa nekuti hakuna mari, timu iri kuda kuenda kwakati hakuna mari. Saka solution yatiri kuda ndiPhidza (our football is struggling because there is no money, the national team fails to travel because of lack of money. So the solution we want is Phidza),” Chivero is heard saying.
Now, most of us haven’t forgotten that back in January 2014, when Chivero and his supporters outfit initially tried to force the ousted Zifa boss Cuthbert Dube out of office; they had publicly charged him, among others things, with personally funding the sport out of failure to secure corporate sponsorship as promised in his election manifesto.
Zimbabwe football tragedy