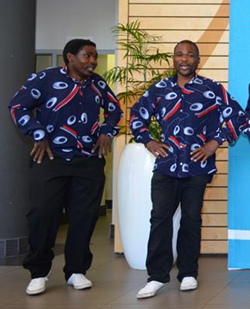 JOHANNESBURG based Imbizo Messengers have been nominated for the South African Traditional Music Achievement Awards (SATMA) in the Isicathamiya category.
The annual SATMA awards are meant to honour those who excel in traditional dances and music with categories including best IsiNdebele album, best SeSotho album amongst others.
Imbizo Messengers leader vocalist Phuthumani Cele welcomed the group’s nomination.
“I think our nomination was initiated by our legion of fans who always go wild when we perform,” he said.
“This is an honour and recognition for the good work we are doing. Even if we do not go on to win this nominations will raise our profile.”
Imbizo have performed in countries such as Austria, Germany, US, Spain, Czech Republic and Italy.
Their song ‘Come Along Thandiwe’ was popular with the then ZBC’s Radio 2 while ‘Imbube’ was the signature tune for traditional music programmes at the public broadcaster.
Formed in 1991 in Filabusi, Matabeleland South, the group moved to South Africa in search for greener pastures in 2000.
According to Cele, the group has remained intact because of “prayer, since most of us are Christians, self-discipline and respect of fellow band members.”
SATMA 2014 winners will be chosen by the fans who will vote through the sms which will be used to streamline contestants with the final nominees expected to be announced in August.
The group told NewZimkbabwe.com that they failed to fulfil one of their invites to Austria last year because of shortage of money.
This year, they have invites from various parts of South Africa which will see them perform in places like Cape Town, Limpopo as well as an overseas country they preferred not to name.
SATMA 2014 finals will be held at the University of Fort Hare on October 3 and 4 where about 1,000 people are expected to attend.
In 2011, another South African-based Zimbabwean musical outfit, Inkanyezi Zezulu made it to the top three in the Isicathamiya category, beating the Grammy award winners, Ladysmith Black Mambazo.Advertisement