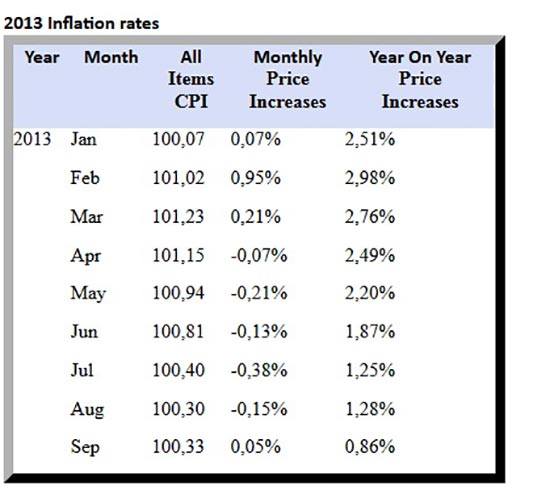 ZIMBABWE’s inflation for the month of February 2015 as measured by the all items consumer price index (CPI) stood at -1.40%, a 0.12 percentage point drop on the January 2015 rate of -1.28%.
The latest report released by Zimstats shows that year-on-year food and non-alcoholic beverages inflation, which is prone to transitory shocks, stood at -2.87% while the non-food inflation rate was lower at -0.68%.
Food inflation took a tumble on the back of a 3.57% fall in bread and cereals, among other foodstuffs.
Non-alcoholic beverages also softened by 2.69% in the year to February.
Communication costs trended down, dropping 13.78% on the back of a 15.25% fall in telephone and fax services.
The strengthening United States dollar among other economic developments- including the drop in oil prices – seems to have contributed to the falling prices.

Zimbabwe uses the US dollar and the strength of that currency against the rand has resulted in price reductions.
Zimbabwean retailers import more than 60% of their groceries from South Africa and a strengthening dollar makes imports from SA cheaper.
However, analysts say softening prices will continue to make local products uncompetitive and will hurt local manufacturers who cannot compete on price.Advertisement